Like China, Some Russians Think Coronavirus Is A U.S. Invention 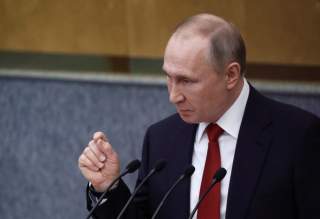 Key point: Speculation of this type has found a willing ear among some, though certainly not all, segments of the Russian media partly because the theme of western encirclement has been so central to Russian security concerns over the past several decades.

As the Coronavirus outbreak continues to roil China with no end in sight, media outlets around the world have indulged in varying degrees of speculation concerning its origins. That speculation has taken a geopolitical turn in Russia, where an increasing number of political commentators have to come to believe that the virus is a U.S. bioweapon ultimately directed at Russia.

First, a disclaimer. The Kremlin—up to and including Russian president Vladimir Putin—itself has shown a remarkable degree of judiciousness since the Coronavirus outbreak, limiting its official statements to expressions of sympathy and offers of aid to the Chinese government.

Nevertheless, certain Russian media commentators don’t share the Kremlin’s sense of restraint. Zvezda, a news outlet funded by the Russian Defense Ministry, published an article late last month titled “Coronavirus: American biological warfare against Russia and China.” The author begins by establishing alleged intent: the virus dealt a blow to the Chinese economy, which weakens Beijing’s negotiating hand in the next round of trade talks to follow the recent signing of the phase one deal between Washington and Beijing.

Zvezda proceeds to the core argument, which centers around long-standing Russian suspicions over the presence of U.S. biological research laboratories across Eurasia: “As is well-known, the USA ratified the Geneva convention on Biological Weapons back in 1975. But the biological games across the ocean have never stopped, and not only in local territory. Right after the Soviet collapse, the presence of American bio-laboratories has so far been confirmed in Georgia, Ukraine, Kazakhstan, Azerbaijan, and Uzbekistan. Where else—only the State Department knows, though it insists that these are harmless groups tasked with developing medical devices. But if they are so harmless, then why did the Americans build them, not at home, but across the world?” The author further infers the supposedly malign intent of these laboratories by pointing out their ties to military-aligned agencies like the Military Threat Reduction Agency (DTRA), and by citing older accusations made by Georgian politician Igor Giorgadze that the U.S. bio-laboratory in Georgia has allegedly tested deadly bioweapons on Georgian citizens.

The popular, if not frequently eccentric, Russian politician and leader of the Liberal Democratic Party of Russia (LDPR) Vladimir Zhirinvoky told a Moscow radio station that the coronavirus is an experiment by the Pentagon and pharmaceutical companies to create localized pandemics that can devastate a select population without spilling over into other countries.

Perhaps the leading proponent of the U.S. laboratory theory is politician Igor Nekulin, who has been making the rounds on Russian television and news media to pose arguments similar to those raised in the aforementioned Zvezda article. Nikulin believes that Wuhan was chosen for the attack because the local presence of the Wuhan Institute of Virology offers the Pentagon and CIA a convenient cover story about bio-experiments gone awry. Also according to Nikulin, the supposedly Pentagon-funded U.S. laboratories in Eurasia have been collecting and treating genetic material from Russian and Chinese populations to allegedly create an “ethnically specific” virus that only targets certain peoples. Russian military expert Viktor Baranets agrees, adding that biological warfare has become a new weapon “in the American fight for global supremacy against its main adversaries.”

Speculation of this type has found a willing ear among some, though certainly not all, segments of the Russian media partly because the theme of western encirclement has been so central to Russian security concerns over the past several decades. Just as eastward NATO expansion has surrounded Russia with hostile military bases, the narrative goes, so too has Russia been surrounded with bio-warfare centers strewn across the former USSR.