The China Threat Cannot Be Ignored 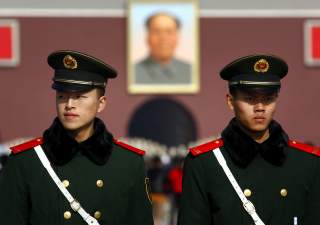 The United States is provoking China by supporting Taiwan, at least according to Lyle Goldstein of the Naval War College. Writing on this site, he thinks America’s policy is exceedingly dangerous, even likening the United States to the Soviet Union. He sees a “Cuban Missile Crisis in reverse.”

The Naval War College scholar suggests that the Pentagon decrease U.S. forces near China and move away from “offensive doctrines” that could result in escalation and ultimately war.

Goldstein raises critical issues. He’s right to tell us war can start over Taiwan. That, however, will almost surely happen if Washington follows his advice and abandons the island republic to an unappeasable Chinese state.

There’s no mystery how Goldstein could get Taiwan so wrong. His perceptions of the situation are factually off-base. For instance, he dismisses the disputes between Beijing and Taipei as “family quarrels on the other side of the planet.” There is one incorrect assumption and one wrong implication embedded in these nine words.

First, the people of Taiwan do not believe those on the other side of the Taiwan Strait are part of their family. At one time, the leaderships of the People’s Republic of China and the Republic of China were linked by the same race, culture and language.

Chiang Kai-shek, who lost the “Chinese civil war,” fled to Taiwan in 1949 with the remnant of his forces. The refugees considered themselves Chinese, and, to secure their hold on the island, Chiang led years of brutal persecution of the local population and suppression of Taiwanese culture and language.

Even before Chiang’s party, the Kuomintang, lost power in a series of lopsided electoral defeats this decade, surveys consistently showed more than 60 percent of the population considered themselves to be Taiwanese only while only low single digits self-identified as Chinese only. The younger the citizen, the higher the likelihood of self-identification as Taiwanese. Chinese ruler Xi Jinping may talk about “Chinese compatriots on both sides of the Taiwan strait are of the same family, whose blood is thicker than water,” but statements like that are rejected by the overwhelming majority of those living in Taiwan.

In any event, more than 70 percent of the island’s population do not believe they are part of “China.”

It is true that Taipei formally maintains it is the legitimate government of China, but Beijing, desperate to keep the bonds between the island and “the mainland” intact, pressures Taiwan to not drop that decades-old claim. Those identifying themselves as Taiwanese would almost certainly move to change the name of their country to “Taiwan” absent Chinese intimidation.

So Taiwan and Beijing may quarrel, as Goldstein puts it, but the tussle is certainly not an intra-family one.

Second, Goldstein is correct that Taiwan is “on the other side of the planet,” but his implication that the island is not any business of the United States could not be further from the truth. Since the last decades of the nineteenth century, American policymakers have drawn their western defense perimeter not off the coast of California or even Hawaii but off the east coast of Asia. Taiwan, at the northern end of the South China Sea and the southern end of the East China Sea, is smack dab in the middle of that first line of defense.

Taiwan helps bottle up the Chinese fleet and air force in China’s peripheral waters—Adm. Ernest King is reputed to have called the island “the cork in the bottle”—and anchors Japan’s defense in the south. There are Japanese islands south of Taipei, and on a clear day one can see Taiwan’s mountains from Japanese soil. Because Japan is America’s “cornerstone ally” in Asia, defending Taiwan is, in a real sense, defending America.

As the Taipei Economic and Cultural Office in New York told the National Interest, “Taiwan has longed played a strategic role in the Asia-Pacific, and the security of the region is of vital importance to the United States.”

Goldstein’s arguments are wrong on other critical points. “China is actually not seeking military conflict with its neighbors, nor even with Taiwan,” he writes. “In other words, Beijing’s intentions, even within the maritime sphere, are reasonably benign.”

Yes, Beijing, like virtually all other aggressors in history, would prefer to take without fighting. Yet its tactics, when it thinks it can get away with them, often involve the use or threat of use of force.

Its attempt to sever the towed sonar array from the unarmed USNS Impeccable in the South China Sea in March 2009 was an act of war as was the December 2016 seizure of a U.S. Navy drone off the coast of the Philippines and outside Beijing’s audacious nine-dash line. The seizure of Scarborough Shoal in early 2012 was an act of aggression, and the blockade of Second Thomas Shoal and moves against other features in the South China Sea and East China Sea are hostile.

The dangerous and fatal encounters Beijing engineers in South Korea’s exclusive economic zone are belligerent. So is China’s repeated violation of Japanese air space over and waters surrounding the Senkakus. Continuous interference with the U.S. Navy and Air Force in international waters and airspace is unwarranted and often reckless. China’s periodic aiming of lasers at the eyes of American pilots, tantamount to attempts to bring down their planes, is not, at least in my book, “benign.”

These actions accompany Beijing all-out assault on legal norms, most notably its unsupportable rejection of the July 2016 arbitral award in Philippines vs. China, a Hague arbitration pursuant to the UN Convention on the Law of the Sea.

Furthermore, Goldstein ignores the trend of China’s expanding territorial ambitions. Once, it maintained ambiguity over the sovereignty of the waters inside its nine or ten dashes on official maps of the South China Sea. Now, it issues official statements about peripheral seas as “blue national soil.” There is also an August 2011 official statement, quantifying the country’s territorial waters, that can only be read as a claim to most of the South China Sea.

Similarly, Beijing once acknowledged Japanese sovereignty over the Senkakus. Now, Beijing claims them as the Diaoyus. This decade, state media has been supporting state institutions that have been laying groundwork to a sovereignty claim to Japan’s Okinawa and the rest of the Ryukyu chain.

Yes, the People’s Republic is neither the Third Reich nor the Russian Federation, but the dynamic is the same: aggressors do not stop until they are stopped.

Goldstein has causation backwards when he thinks Washington is triggering another Cuban Missile Crisis. “Handbags are snatched because women carry them provocatively; pogroms kill because Jews wear yarmulkes; rape is caused by sexy clothes; and oh, yes, World War II was sparked by Czech threats to Germany,” Arthur Waldron of the University of Pennsylvania told the National Interest last week. “Surely Professor Goldstein understands that China is an aggressive state?”

Whatever Goldstein understands, he sees the wrong solution. He spends much of his National Interest piece touting China’s operational capabilities and making them look almost “insurmountable,” as James Fanell, a retired U.S. Navy intelligence officer and now a leading analyst of China’s naval forces, told me. “American, Taiwan, and Japanese military planners should be developing lethal counters to Chinese avenues of attack,” Fanell recommends. As he points out, “direct and unambiguous military deterrence by the U.S.” can keep the peace.

“Taiwan is emphatically not a ‘core interest’ of the U.S. and Chinese leaders are all too aware of that glaring truth,” Goldstein writes, concluding his National Interest piece. He would be right if he wrote that American policymakers have yet to make it clear that Taiwan is a core interest.

Yet it is, in reality, core to the United States, and not only because it anchors America’s western perimeter. It is core these days because Beijing has been continually attacking not only U.S. democratic institutions but also the concept of representative governance itself. China’s rulers, unfortunately, have launched an assault on everything not both communist and Chinese.

Goldstein surely does not advocate Beijing taking Taiwan over, but the policies he promotes would surely lead to that result. He is wrong on most assumptions he makes, and so his conclusion, that Taiwan is not important, is therefore fundamentally wrong. As the Taipei Economic and Cultural Office in New York notes, the United States and Taiwan share values, making it “even more crucial for us to work together to defend our values and ensure peace and stability of the region.”

And the peace and stability of the world. Not since the early 1950s—and maybe not even then—has the safety and security of Taiwan been so critical to the United States and to the international system.

Image: Paramilitary policemen stand guard on Beijing's Tiananmen Square November 6, 2012 as security is tightened around the square and the adjoining Great Hall of the People. Just days before the party's all-important congress opens, China's stability-obsessed rulers are taking no chances and have combed through a list all possible threats, avian or otherwise. The goal is to ensure an image of harmony as President Hu Jintao prepares to transfer power as party leader to anointed successor Vice President Xi Jinping at the congress, which starts Thursday. REUTERS/David Gray