China Tracked a U.S. Navy Destroyer as it Transited the Taiwan Strait 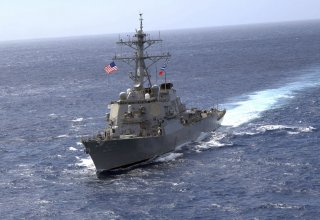 The Chinese government accused the United States of sending the wrong signal to proponents of independence for Taiwan last week after a U.S. warship passed through the Taiwan Strait, prompting the People’s Liberation Army Navy (PLAN) forces in the region to go on high alert. Beijing, which sees Taiwan as a breakaway province, remains quite sensitive to all U.S. military movements in its periphery.

Maj. Zhang Chunxuan, spokesperson for China’s Eastern Theater Command told reporters that air and sea forces were mobilized to keep tabs on the USS Barry (DDG 52), an Arleigh Burke-class guided-missile destroyer that has been operating in the region this year.

The U.S. Navy confirmed that the Arleigh Burke-class guided-missile destroyer had conducted a routine Taiwan Strait transit last Wednesday, October 14, and that it operated within accordance with international law. The Navy said the ship’s transit through the Taiwan Strait was to demonstrate the U.S. commitment to a free and open Indo-Pacific region. The Navy added that it will continue to fly, sail and operate anywhere international law allows.

The USS Barry wasn’t the only international warship to pass through the 110-mile strait (eighty-one miles at its narrowest point) that separates mainland China from China this month.

A Canadian Navy corvette transited the strait on Oct. 3, sailing from the South China Sea to the East China Sea at the north. In addition, U.S. Navy warships have conducted transits of the straits at least a dozen times this year—the most recent prior to last week’s took place at the end of August when the Arleigh Burke-class destroyer USS Halsey (DDG 97) sailed past Taiwan and that was twelve days after yet another Arleigh Burke-class destroyer USS Mustin (DDG 89) conducted a similar voyage in the international waterway.

It is somewhat notable too that last week’s transiting of the Taiwan Strait involved the USS Barry, as it is the same warship that the PLAN reported had been “expelled” from the disputed waters in the South China Sea in April.

At the time Beijing alleged that the U.S. destroyer had “intruded without permission” near the Paracel Islands, which have been claimed by China, but also by Vietnam and Taiwan. While Washington does not recognize Beijing’s territorial claim, China currently has control of the islands, which are administered by the provincial government in Hainan.

Last week’s journey past Taiwan may have also seemed familiar to the crew of the USS Barry, as she had passed through the straits in April prior to operating in the South China Sea. U.S. Navy officials have maintained that the destroyer, which is named after the “Father of the American Navy” Commodore John Barry had not been expelled from the region. The warship had proceeded as planned without encountering any unsafe or unprofessional behavior from Chinese military aircraft or warships, the Navy said.

USS Barry had been active in the South China Sea operating with the guided-missile cruiser USS Bunker Hill (CG-52) and amphibious assault ship USS America (LHA-6), which operated in the region while the USS Theodore Roosevelt (CVN-71) remained sidelined in Guam due to an outbreak of coronavirus.