China Is Training to Fire Artillery at 'High Altitudes'. Why Bother? 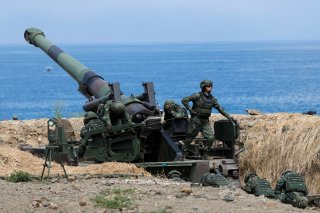 The People’s Liberation Army is firing off towed artillery in the plateau regions of Western China to prepare for high altitude warfare in extreme weather conditions, a development which is just a small part of a broader Chinese military effort to massively up-gun its mountain warfare force.

While the weapons plus up involves many different systems to include self-propelled howitzers and armored assault vehicles, a more transportable towed gun howitzer seems of particular relevance when it comes to high altitude warfare.

The Chinese government-backed Global Times newspaper reported that PLA forces were firing a PL-66 152mm towed howitzer against mock targets in snow-covered plateau areas at elevations greater than 4,500 meters. The live-fire exercises, according to the Chinese paper, took place in the well-known Xinjiang Uygur Autonomous Region in northwestern China near its border with Russia and Central Asia.

What seems most significant about a towed howitzer of this kind may rest upon the answer to one clear, simple question. Is it air-droppable?

If so, it would offer China what may be a new expeditionary attack capability for higher altitude warfare. The possibility brings the U.S. Army’s M777 Howitzer to mind, as it is a mobile 155mm artillery weapon that can sling load beneath a Chinook transport helicopter. Air droppable mobile artillery naturally introduces new tactical options for ground war commanders looking to forward position suppressive fires or precision attack weapons in otherwise impossible to reach locations. Self-propelled howitzers or other kinds of heavier armored vehicles of course face the challenge of deployability, meaning can it be brought to mountainous areas not transitable by most wheeled platforms.

Air-delivered artillery can bring impactful long-range strike possibilities to mountainous or plateau regions. Given this, it seems a key question would be: does China operate a large cargo helicopter capable of air-delivering this towed artillery?

This is likely significant for wargamers running scenarios of any kind of ground war in China, however unlikely. Should China have an improved capability for various kinds of conventional armored attacks in high altitude, mountainous regions typically restricted to foot soldiers, it would introduce new challenges for any invading force looking to advance through China’s vast regions of mountainous, uneven terrain.

Even if an attacking force were able to achieve air superiority over China, there would still likely be many impediments when it comes to actually advancing through and occupying land, unless the attack force operated with superior mountain warfare capabilities. An ability to air-drop mobile artillery would greatly impact this equation given the difficulty of transporting critical heavy fire support into mountainous terrain.