China Is Tripling the Size of Its Marine Corps 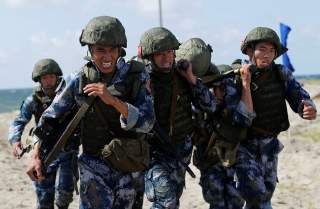 Key point: That is very bad news for Taiwan.

China is bulking up its marine corps.

China's People's Liberation Army Navy Marine Corps will only be a fraction of the size and power of the U.S. Marine Corps. But like their American counterparts, the PLANMC is becoming an expeditionary force to project Chinese power around the globe.

"I would argue that over several years, the PLANMC has been developing into a rapid response force that could be tasked with conducting a variety of expeditionary missions to defend China's overseas interests," Alan Burns, a China expert with the non-profit Center for Naval Analyses in Arlington, Virginia, told The National Interest.

"One of the most significant PLAN structural changes in 2017 was the expansion of the PLAN Marine Corps (PLANMC). The PLANMC previously consisted of 2 brigades, approximately 10,000 personnel, and was limited in geography and mission (amphibious assault and defense of South China Sea outposts). By 2020, the PLANMC will consist of 7 brigades, may have more than 30,000 personnel, and will expand its mission to include expeditionary operations on foreign soil, as PLANMC forces are already operating out of the PLA’s base in Djibouti. A newly established Marine Corps headquarters is responsible for manning, training, and equipping the expanded Marine Corps and, for the first time, the PLANMC has its own commander, although it is still subordinate to the PLAN. The PLANMC may also incorporate an aviation brigade, which could provide an organic helicopter transport and attack capability, increasing its amphibious and expeditionary warfare capabilities."

Burns believes the changes in the PLANMC's command structure, notably the establishment of a headquarters under a single commander, are particularly important.  "Previously, the two Chinese marine brigades were subordinate to the PLA Navy South Sea Fleet. Now, the PLANMC commander will likely be subordinate to the PLA Navy headquarters directly, which indicates a significant increase in status and the evolution of the PLANMC into something greater than just one of five equal branches of the PLA Navy. This could indicate that the types of missions that Chinese marines are suited to perform are becoming a higher priority for Beijing."

Burns also points to the growing reach of China's marine corps. Since 2005, Chinese marines have been participating in overseas exercises with nations such as Russia and Thailand. Since 2008, they have been dispatched on several overseas missions, including anti-piracy patrols in the Gulf of Aden and civilian evacuation in Yemen, as well as domestic earthquake relief in Sichuan province. The PLANMC is also moving beyond coastal operations, to include training in winter, desert, mountain and jungle environments.

"This indicates the expanded PLANMC will be used to conduct a variety of missions in a variety of environments far from China's shores and serve as the 'tip of the spear' on the ground," Burns adds. "Having a marine force that can conduct expeditionary operations is one part of Beijing's efforts to build a strong military appropriate for what Chinese leaders see as China's ambitions to be a maritime great power."

Inevitably, the question will be asked: is China's marine corps like the U.S. Marine Corps? But that's comparing apples and oranges. The USMC is a unique military institution: though technically under the control of the navy, it is a separate branch of the U.S. military. With 186,000 active-duty marines, the USMC is more like a mini-army (complete with its own private air force) that isn't that much smaller than the 475,000-strong U.S. Army.

China's PLANMC are marines in the classical sense: a small force of naval infantry that are there to support the navy with missions such as capturing and guarding naval bases. With 30,000 marines and an attached helicopter brigade, the PLANMC is a formidable force as far as it goes, but hardly capable of the big operations of the USMC.

"While it looks like the PLANMC has increased in status beyond being one of five equal branches of the PLA Navy, it is still not likely to reach quite the position that the USMC has in the U.S. military," Burns says.