China Is Trying to Compare the Flu to Coronavirus. That Sounds Like Fake News. 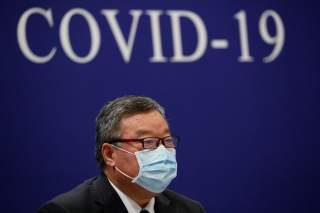 Early on in the outset of the coronavirus pandemic, the receptionist at the hotel I was staying at in China asked me if it was true that the United States was experiencing an epidemic of influenza that killed 61,000 people last year.

“No…” I responded, perplexed where this idea had arisen from.

In skimming the Chinese news, I had seen some mentions of the flu “epidemic” in the U.S. I classified it as typical misdirection, the kind of subtle criticism of the U.S. that China’s state-owned media engages in from time to time when they are embarrassed, frustrated, or trying to advance a foreign policy goal.

Not all of the Chinese news articles have been completely misleading. QQ News (not a specialized propaganda apparatus) published an article that pointed out the death rate for one set of numbers cited was only 0.05 percent and that “the vast majority were old, weak, or sick. It is possible that their health was already poor.”

Turns out the 61,000 death toll estimate comes from the U.S. Centers for Disease Control, making it all the more fun for China to cite in order to boost their trolling credibility. Like Sean Hannity when he finds a New York Times headline he likes: “Even the liberal New York Times/the American’s own federal health agency says…”

The hotel receptionist is interested in foreign news and opinion and was initially skeptical of the Chinese report.

“So it’s fake news?” he asked of the article in question.

“No, not fake news exactly. The number is basically true, but it’s misleading,” I said.

In fact, if you look at the CDC numbers for 2017-18, they say there were 45 million people infected with the flu, 21 million hospital visits, 810,000 long-term hospitalizations, and 61,000 deaths. Thirteen percent of Americans were infected with at least a minor flu, apparently. Do the math, and only 0.1 percent died. The fatality rate for coronavirus is estimated at 2.1 percent—well lower than SARS but over twenty times higher than the flu.

The CDC uses a completely different process and different standards to calculate the extent of influenza than Chinese and global authorities are using to calculate coronavirus. The CDC’s numbers are estimates. It uses a mathematical model based on previous years, observed data, and other factors applied to the entire U.S. population to arrive at a 95 percent confidence interval. The low end of the confidence interval is typically about half of the high end, while the headline number is approximately in the middle.

The CDC counts people who died after contracting influenza from other diseases. As the CDC website states:

Seasonal influenza may lead to death from other causes, such as pneumonia, congestive heart failure, or chronic obstructive pulmonary disease. It has been recognized for many years that influenza is underreported on death certificates. There may be several reasons for underreporting, including that patients aren’t always tested for seasonal influenza virus infection, particularly older adults who are at greatest risk of seasonal influenza complications and death. Even if a patient is tested for influenza, influenza virus infection may not be identified because the influenza virus is only detectable for a limited number of days  after infection and many people don’t seek medical care in this interval. Additionally, some deaths – particularly among those 65 years and older – are associated with secondary complications of influenza (including bacterial pneumonias). For these and other reasons, modeling strategies are commonly used to estimate flu-associated deaths. Only counting deaths where influenza was recorded on a death certificate would be a gross underestimation of influenza’s true impact.

It’s really comparing chalk and cheese to compare the two sets of numbers, which are calculated in different ways about different populations, and different diseases. It is certainly clear, however, that coronavirus is the more dangerous disease and is causing a much bigger effect on public health and the economy. There is no need to quarantine entire cities or monitor people’s movements within the country in order to combat the flu, for example. A chart in the New York Times shows that coronavirus is both more contagious and more deadly than seasonal flu.

Yet many American publications have also adopted a version of the same line as China’s state media. “Don’t buy the media hype over coronavirus,” the NY Post ran over a column. “Something far deadlier than the Wuhan coronavirus lurks near you, right here in America,” an article distributed by Kaiser Health News announced. Buzzfeed, The Daily Beast, and Self magazine, among others, all ran articles on the theme.

There are a number of reasons, somewhat justifiable, for exaggerating the threat of the flu for effect. First, many of the publications are trying to encourage people to get their flu shots (the presence of which, itself makes the flu less dangerous than coronavirus). Second, it is true that there was a panic over coronavirus in some quarters.

Whether it was tabloid claims that tens or even hundreds of thousands of people were infected in the first weeks when the reported number had only hit hundreds or conspiracy theories that the virus was a weapon that escaped from a lab (suggested even by Sen. Tom Cotton), certain media outlets and bloggers really were fostering paranoia. That paranoia did, in fact, lead to instances of racism against Chinese around the world and, last week, a riot in Ukraine over the return of Ukrainian citizens from Wuhan.

Face masks in Washington DC’s Dupont Circle area and around much of the country sold out at pharmacies in the U.S. after just suspicions of a few cases were first reported, even though the risk of catching coronavirus, much less dying from it, in a city of a few million with potentially one person having the virus, is close to nil.

On February 13, a man was shot and killed in DC’s Chinatown district, an area I frequented when I lived in the capital. Around that same time, some friends in DC were suggesting I leave China. Yet in some ways—certainly in terms of gun violence and violent crime—I am safer here than I’d be in the U.S.

Determining the proper level of fear and what kind of precautions should be taken is extremely subjective. It depends on one’s risk tolerance and how people compartmentalize different kinds of risks. We should be concerned about coronavirus without panicking about it, neither downplaying or exaggerating the situation.