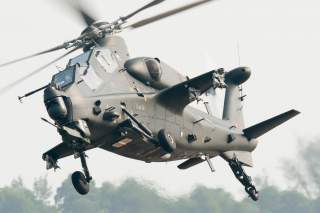 The future of warfare is manned-unmanned teaming between manned platforms and robots (or at least until fully autonomous robots fight on their own).

With the United States and Russia vigorously pursuing that concept, it’s no surprise that China is testing attack helicopters operating alongside UAVs.

“While various countries have tested drone swarms or full-size aircraft working with UAVs in a so-called Cooperative Engagement Capability, this appears to be a new development for the PLA,” according to the U.S. Army’s Foreign Military Studies Office.

A reporter for the PLA Daily, the newspaper of the People’s Liberation Army, described a May exercise by the 79th Group Army, based in northeastern China, that combined an attack helicopter and a reconnaissance drone:

“In the helicopters’ cabin, one after another the crew issues commands to a drone 100 meters away. The drone is constantly changing its flight attitude and transmitting real-time information about the battlefield to a control panel aboard the helicopter. In the early summer, a brigade of the 79th Group Army has adopted an innovative training model and is using a UAV in tandem with an armed helicopter.”

But it also appears that Chinese field commanders have their reservations about teaming manned helicopters with drones. “Integrating new combat forces has added challenges to the task of command, requiring the brigade commander to accurately calculate various parameters such as the number of troops, the time of combat actions, and the performance of the equipment, and to rely on the integrated command platform to achieve fast and accurate command decisions and assess damage,” the PLA Daily reporter noted.

Nonetheless, PLA ground commanders are sending the message that integrated air-land operations will become the norm. "Future battlefields on land are no longer ‘ground battlefields’ in the traditional sense, and combat operations will be carried out simultaneously in multiple dimensions,” declared brigade commander Li Xincheng. “The new type of war requires a highly efficient and capable new type of army. It must focus on the requirements of joint operations and actively improve the ‘battlefield contribution rate’ of a given system in the future war.”

Meanwhile, the U.S. Army is moving ahead with manned-unmanned teaming. Army Futures Command, a new organization charged with developing new technologies, is working to integrate manned platforms with swarms of drones. AFC scientists “exploring the potential to deploy unmanned aerial systems, or UAS, and unmanned ground vehicles, or UGV, to act as complementary swarm components,” according to an Army news release.

“Swarming is a method of operations where multiple autonomous systems act as a cohesive unit, actively coordinating their actions. Once mobilized, the swarms would enable small units to quickly implement manned-unmanned teaming, or MUM-T, for a variety of mission types. Data would flow quickly from the swarm back to soldiers, mounted or dismounted, who could then provide further instructions, if necessary, to the swarms.”

For example, swarms of small drones could track a target—such as a guerrilla fighter—moving through rough terrain that a conventional army unit couldn’t quickly traverse. But the drone could relay data to the unit, which could then engage the target with long-range fire.

There are a few hurdles that must be overcome to make manned-unmanned teaming a reality. The human half of the team needs a control interface that will a lone human, such as a fighter or helicopter pilot, to easily control a swarm of drones with a few general commands. The machine half needs AI that can seamlessly coordinate the actions of hundreds of drones in response to a few simple instructions from a human operator.