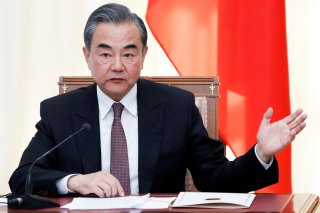 The Chinese government cautioned the United Nations (UN) on Tuesday not to be involved in China’s “internal affairs” as UN High Commissioner for Human Rights Michelle Bachelet is scheduled to visit Xinjiang, the site of a series of controversial “re-education” camps intended for the autonomous region’s Uyghur Muslims.

Bachelet indicated earlier in the week that she had received permission from the Chinese government to visit the camps after attempting to secure access for more than a year. Bachelet’s trip is scheduled for May; an advance team of UN personnel arrived in Guangzhou on April 25 and are currently in quarantine to comply with the country’s strict COVID-19 policies. A UN spokesperson claimed that it was “standard practice for a preliminary technical mission to be deployed ahead of a possible High Commissioner visit” in countries where the UN Human Rights Office has limited access. The spokesperson claimed that the advance team would help to “ensure the meaningful access that would enable the Office to gain a clear understanding of the human rights situation in the country.”

Chinese Foreign Ministry spokesman Wang Wenbin confirmed the arrangement, saying that Bachelet’s visit was intended to “promote exchange and cooperation” between China and the United Nations. “We are opposed to political manipulation by exploiting the matter” of Xinjiang, Wenbin said.

In her role as high commissioner, Bachelet has previously raised concerns about human rights in Xinjiang. In June 2021, she announced that she intended to visit Xinjiang to evaluate “reports of serious human rights violations” there, which led China’s UN mission to issue a denunciation claiming that her remarks were “erroneous” and “interfere[d] in China’s sovereignty.”

After initially being refused access to Xinjiang by the Chinese government, Bachelet indicated later in the year that she would write her report anyway, based on information obtained from the testimony of Uyghur exiles outside China. Although she insisted that this report would be published by the end of 2021, it has yet to appear.

In January, the South China Morning Post reported that Beijing had agreed to allow Bachelet to visit Xinjiang after the conclusion of the Winter Olympics—as long as the trip was framed as a goodwill visit rather than an inspection.

China’s actions in Xinjiang—reportedly including forced labor, political and cultural indoctrination, and even sterilization—have been the subject of widespread criticism in the West. The United States, Canada, the United Kingdom, and several other nations have formally recognized the treatment of the Uyghurs as a “genocide,” a description that has angered the Chinese government and led to growing diplomatic tensions.