China Will Keep Brandishing Its Nuclear Weapons Over Taiwan 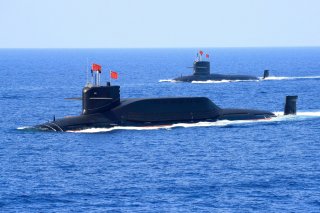 Following U.S. Speaker of the House Nancy Pelosi’s Taiwan tour in August 2022, Beijing paraded its nuclear-capable DF-5B intercontinental ballistic missiles (ICBMs) in war games that were conducted near Taiwanese waters. The DF-5B ICBM has a range of up to 9,321 miles, enabling it to reach North America. Revealing the intention behind its parading, Yue Gang, a retired People’s Liberation Army (PLA) colonel, said, “It is aimed at warning the US and its close ally Japan not to intervene in the Taiwan issue, reminding them Beijing has the most powerful weapon that could give [them] a deadly strike.”

Historically, the People’s Republic of China (PRC) has been very reticent about engaging in nuclear signaling. Therefore, one would naturally ask what is driving the Chinese to rely more on their nuclear weapons arsenals now. Aren’t Beijing’s conventional capabilities enough to deter a U.S. intervention in support of Taiwan? In fact, Chinese anti-access/aerial-denial (A2/AD) capabilities are inadequate: they will fail to hold the U.S. military at bay while Beijing tries to establish air and sea command in the Taiwan Strait during an invasion of the island.

This admission may come as a surprise given the abundance of recent analyses suggesting how China’s rapid military modernization has undermined the conventional deterrence capabilities of the United States and its allies within the first island chain. Indeed, many claim that Chinese A2/AD systems are already capable enough to hold the U.S. military at bay if China were to invade Taiwan. Their argument rests on two assumptions. First, Taiwan’s A2/AD assets will capitulate under siege from a massive Chinese offensive that targets Taiwanese air and naval bases, missile batteries, and command and control centers (C2). Analysts believe that if Taipei’s air defenses and offensive forces collapse under assault from the PLA’s 1,500 highly-accurate missiles and 1,000 advanced, combat-ready fighter aircraft, the PRC will be able to establish air and sea command in the Taiwan Strait, a prerequisite for the PLA’s subsequent amphibious landing on Taiwan.

Second, these assessments assert that Beijing can halt the U.S. military by initiating offensive cyberattacks and firing precision-guided munitions from trucks and small ships based on or near the PRC’s territory. Using these cheap platforms, analysts believe Beijing can asymmetrically fend off Washington to deny the U.S. military air and sea control near Chinese territory.

Both these assumptions have gaping holes in their articulation. First, there is an overemphasis on an unlikely scenario of a debilitating Chinese sneak attack that catches Taiwan completely by surprise. A completely off-guard Taipei will lose most of its missile batteries, aircraft, and ships, according to this scenario. With no advanced knowledge of the PLA attack, Taiwan will succumb. In reality, however, Taiwan is equipped with one of the best early warning systems in the world which will allow the Taiwanese leadership to have some advance notice. Elaborating further, Michael Beckley writes:

If Taiwan detected an impending PLA attack, it would quickly deploy its navy and disperse its combat aircraft among thirty-six airfields scattered around the island. Some of these locations have aircraft hangars built inside of mountains. Others have aircraft shelters with six-foot thick concrete walls. If PLA missiles cratered the runways at Taiwan’s air bases, Taiwanese aircraft could operate from ten civilian airstrips and five highways that double as emergency air bases, all of which have fuel and supplies prepositioned for the air force. Meanwhile Taiwan’s runway repair teams, which currently hold the world speed record for runway repair (three hours), would start patching the tarmac at the main air bases.

Taiwan’s air defenses are also not as vulnerable as these assessments presuppose. Taiwan has more than 500 long-range surface-to-air missile launchers, 80 percent of which are road-mobile; thousands of short-range surface-to-air missile launchers mounted to vehicles or carried by ground troops; and around 400 road-mobile antiaircraft guns. All of these will be pointed at incoming Chinese missiles and aircraft and perhaps strike PLA bases and missile batteries in retaliation.

Other studies have similarly questioned the effectiveness of a Chinese offensive against Taiwan. For example, in 2013, PLA computer simulations found that PLA Air Force can only knock out a few Taiwanese air bases for a few hours. Yet for the sake of conservatism, if we assume that, indeed, the PLA could destroy most of Taiwan’s air and naval forces in a sneak attack and establish air and sea dominance immediately, the question remains: will this lead to a successful amphibious invasion of the island? Beckley is skeptical. He argues:

…unless China destroyed all of Taiwan’s antiship missile launchers, Taiwan could “thin the herd” of PLA amphibious ships as they load in Chinese ports or transit the Taiwan Strait. Computer simulations suggest that Taiwan would only need to fire fifty precision-guided missiles to destroy a dozen Chinese amphibious ships, losses that would end all hopes of a successful invasion. Taiwan also could bombard PLA landing craft with short-range artillery fire as they made their final twenty-minute run into the beach. Even if China’s prospects are better than I have suggested, the PLA clearly would have its hands full just dealing with Taiwan’s defenders.

Regarding engaging American forces, if Taiwan fails to defend itself, the RAND Corporation calculates that, in a surprise attack, the United States could lose its air bases in Japan and, subsequently, as many as seventy-eight aircraft in the process of winning back command of Taiwanese skies. Beckley counters this assessment as well:

Again, this scenario assumes that the United States will refrain from attacking Chinese air bases. In reality, if China attacked U.S. bases, the U.S. military would almost certainly retaliate by cratering the runways at Chinese air bases. Computer simulations show that one week of U.S. air attacks, supplemented by 200 Tomahawk missiles launched from two Ohio-class submarines, could disable 30 to 45 percent of China’s air bases near Taiwan or all of the air bases near the South China Sea, and destroy 90 percent of the aircraft parked at these bases, while losing few if any U.S. aircraft and no ships or submarines. Thus, the United States can still “win” an air war against China with no help from allies, but it might lose dozens of aircraft in air-to-air combat and potentially many more on the ground if China attacks U.S. air bases.

In the arena of sea denial, the U.S. Navy has the capability to sink PLA Navy (PLAN) ships and submarines virtually anywhere in the first island chain. Hamstrung by weak antisubmarine capabilities, the PLAN cannot credibly deny the U.S. Navy’s missile-armed submarines at war or even peacetime. Aiding U.S. submarines’ operational efficiency is America’s vast undersea surveillance network, which can set up picket lines near the combat theater, or near China’s ports, and help U.S. sailors sink China’s ships and submarines with torpedoes, missiles, and mines.

The RAND Corporation concludes that eight U.S. submarines can destroy almost 40 percent of the PLAN’s amphibious ships if they try to cross the Taiwan Strait, while the U.S. Navy is likely to lose only one submarine. RAND also estimates that this naval contest will become even more lopsided in the South China Sea (SCS). The waters of SCS have greater depth which will give U.S. submarines equipped with better acoustics more room to operate underwater. U.S nuclear-powered submarines (SSNs) diving further down into the SCS’ depths will be a nightmare for the PLA’s meager anti-submarine warfare forces, which are incapable of covering the depths of the region. Therefore, U.S submarines can indiscriminately sink Chinese ships without fearing attacks of reciprocal proportionality. Thus, the United States has an overwhelming military lead over the PRC in competing for dominance in a conflict over Taiwan. As a result, the United States’ superior conventional capabilities are driving the Chinese to rely more on their nuclear weapons. In the future, Chinese nuclear signaling will only increase further.