China Will Not Invade Taiwan Today. But Is It Conducting a Test Run? 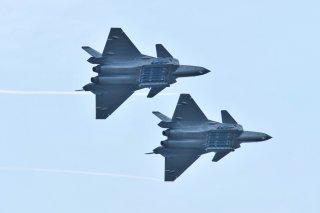 The Chinese military is swarming Taiwan’s airspace and waterways in a massive display of power with fighter jets, bombers, and anti-submarine warfare aircraft. This appears to be a clear effort to intimidate and send a warning to Taiwan.

A Chinese government-backed newspaper said the power demonstration was in part a response to what it called a “wrong” and “irresponsible” signal from the United States expressing “concern” over Chinese provocations regarding Taiwan. The paper says the large-scale Chinese power demonstration shows China maintains power and control in the areas surrounding Taiwan.

“The US has been making aggressive moves including arms sales to Taiwan, landing military aircraft on the island and sending warships through the Taiwan Straits,” according to the Global Times.  The paper goes on to say that the military exercises were deliberately intended to “send a warning” to “secessionists.”

While China’s show of power may seem like an escalation, it is truly more of the same in many respects. The PLA has been sending fighter jets along the Taiwanese coastline for many years and even staged extremely provocative amphibious warfare drills and preparations in waters near Taiwan. The Chinese government regularly refers to its “one China” policy and regards Taiwan independence as secessionist. However, given the measure of U.S. and allied resolve in the region, and the growing extent to which Taiwan is acquiring new weapons and technologies, it may not seem too likely that China would initiate a massive offensive to take over Taiwan.

There are many realities standing in the way of a Chinese attack on the island of Taiwan. For instance, there is a large and consistent U.S. presence in the Pacific region. Additionally, Taiwan continues to arm itself with both offensive and defensive weapons platforms. Taiwan is building its own submarines and receiving input from the U.S. Navy, buying Abrams tanks to repel any kind of amphibious attack and operating a number of shore-to-surface coastal weapons aimed at thwarting any kind of Chinese maritime attack.

The real challenge when it comes to defending Taiwan may become one of access and response time, a circumstance that likely informs why there is such a large U.S. presence in the Pacific region. This presence includes Bomber Task Force patrols, carrier-attack training and preparations, amphibious warfare drills and regular transit through the Taiwan Strait and areas of the South China Sea that China attempts to claim as its own.