China Won't “Fire the First Shot” in a Confrontation with the U.S. Navy in South China Sea 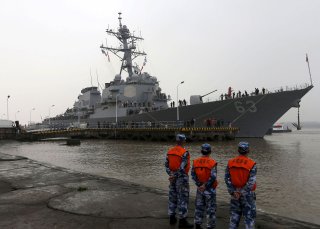 Chinese military leaders have instructed their forces not to “fire the first shot” should there be any conflicting signals or stress between U.S. and Chinese warships in the South China Sea, as part of an apparent move to de-escalate the tension between the two countries.

“Sources say that troops have been given orders not to escalate the situation as both sides step up their activities in the disputed waters,” the South China Morning Post said in a report, adding that Beijing has agreed to a conversation between U.S. and Chinese defense ministers.

The intended “de-escalation” comes at an extremely significant time, given recent U.S. and Chinese maneuvers in the region. For instance, America has operated two carrier strike groups in the Pacific and conducted dual-carrier attack drills. While these drills were described as routine training and interoperability exercises, refining dual-carrier attack capabilities brings a massively increased ability to project power. Not only can two carriers launch a higher number of attack sorties and increase the speed of combat operations, but emerging networking technology can enable otherwise disparate Carrier Strike Groups to coordinate targets and share valuable reconnaissance and sensor information.

Also, both U.S. and Chinese fighter jets have been conducting drills in various key areas such as near the Taiwan coastline and in disputed regions of the South China Sea. Additionally, bomber patrols by both countries are also on the rise.

Not only have U.S.-Chinese relationship problems worsened in recent months, but many senior U.S. military officials have expressed concern that a potential misunderstanding or miscalculation of some kind could inadvertently spark an unwanted military confrontation.

For instance, should a U.S. destroyer, as part of a Freedom of Navigation Exercise, sail within the twelve-mile territorial boundary of island territory claimed by China, Chinese ships or jets might come too close to U.S. warships. Should any of these kinds of circumstances generate sufficient concern or be mistaken for an actual attack of some kind, Naval forces could indeed wind up firing upon one another.

The request for a defense minister discussion between the America and China was first suggested by Washington, but reportedly received a poor reception from China, the paper said. Yet, the prospect of a dialogue between the two now appears likely.

By any estimation, a major maritime confrontation between the United States and China in the South China Sea could easily become catastrophic. Moreover, the pace at which the Chinese military is building new ships and expanding its Navy is considered nearly breathtaking by many U.S. observers. China is already launching a second Type 075 amphibious assault ship, new stealthy destroyers and its first indigenously-built carrier.

It may be tough to know just how effective these developments may be when it comes to improving relations between the countries. However, efforts to decrease problems in the disputed region are good. The many issues between the countries points to the overwhelming complexity of the U.S.-China relationship as both countries are serious military and political rivals, yet also mutually-beneficial trading partners.

Osborn previously served at the Pentagon as a Highly Qualified Expert with the Office of the Assistant Secretary of the Army - Acquisition, Logistics & Technology. Osborn has also worked as an anchor and on-air military specialist at national TV networks. He has appeared as a guest military expert on Fox News, MSNBC, The Military Channel and The History Channel. He also has a Masters Degree in Comparative Literature from Columbia University. This article first appeared last year.