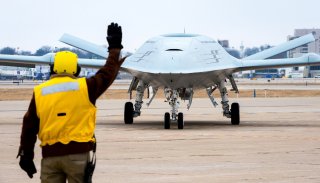 What began as a concept years ago, followed by extensive prototyping and demo efforts, has now come to life. The Navy’s new carrier-launched drone refueled an F-18 multirole fighter jet in flight, marking a sizeable step forward in the Navy’s multi-year development of a first-of-its-kind platform intended to massively extend the attack range for carrier-based fighter jets, extend dwell time, and enable carriers to project power from much greater standoff distances.

The MQ-25 Stingray conducted its first-ever “aerial refueling operation” between a drone and manned fighter from an airport in Illinois, a Navy statement said.

“During the flight, the receiver Navy F/A-18 Super Hornet approached the Boeing-owned MQ-25 T1 test asset, conducted a formation evaluation, wake survey, drogue tracking, and then plugged in with the unmanned aircraft. T1 then successfully transferred fuel from its Aerial Refueling Store to the F/A-18,” a Navy report explained.

The service is now collecting data on performance, guidance technology and control mechanisms fundamental to the process with a mind to considering needed software upgrades in the future, Captain Chad Reed, a program manager for the Navy’s Unmanned Carrier Aviation, said in the Navy statement.

“Testing with T1 will continue over the next several months to include flight envelope expansion, engine testing, and deck handling demonstrations aboard an aircraft carrier later this year,” the report adds.

The existence of a platform of this kind brings numerous strategic and tactical implications of great relevance to Navy war planners looking for new ways to address a fast-changing and, in some cases, entirely new threat landscape. Specifically, it would not be too much of a crazy stretch to say the existence of this refueler could be the difference in victory or defeat in a possible war against China.

Why? One big reason that continues to command significant attention is the existence of China’s well-known and much-hyped “carrier-killer” anti-ship missiles, the DF-21D and DF-26. These weapons, regularly test-fired by China, reportedly operate with the technical ability to launch precision strikes against aircraft carriers from distances as far as 1000 or even 2000 nautical miles. Looking at the math, if an F/A-18 or F-35 operates with a combat radius of 300 nautical miles, a carrier might need to operate within striking range of a DF-26 missile in order to project power and launch attacks over land.

However, what if an MQ-25 Stingray were able to, in effect, more than double that range? Carriers could operate powerful attacks at safer ranges. Interestingly, evolving carrier defenses may enable carriers to operate anywhere, despite the much-hyped threat of these Chinese weapons, yet an ability to launch effective attacks and sustain a high sortie rate at farther distances definitely changes the equation with regard to possible Navy operational tactics.  Not only would a carrier-launched drone remove the need for a large, non-stealthy fixed-wing manned tanker to conduct missions in high-risk areas, but a drone-refueled fighter jet would operate with considerable more dwell time over attacked areas to strike multiple targets or re-direct missions as dictated by newly arriving intelligence data.