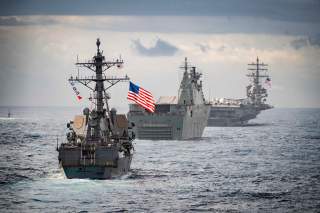 When lobbing gigantic rockets into the stratosphere traveling at many times the speed of sound, it’s both a basic courtesy and common sense to forewarn pilots in the area to stay out of the way.

Therefore, late in June 2019, China issued a Notice to Airmen (NOTAM) warning of ballistic missile tests into distinct areas in the South China Sea: one zone stretching from Hainan island to the disputed Paracel islands, and a second box-shaped sector north of the Spratly islands.

This is the most dramatic indication yet that China is finally moving forward with testing its growing arsenal of land-based ballistic missiles designed to threaten vessels over a thousand miles away at sea.

Since the 1960s, the principal anti-ship threat has come from cruise missiles, which skim on a horizontal trajectory a few meters above the surface of the ocean have served as the principal anti-ship weapon. While most cruise missiles are little faster than an airliner, some like the Kalibur or Brahmos can surge to several times the speed of sound and perform evasive maneuvers to lower the chance of interception.

Compared to the low, slow, and relatively stealthy cruise missile, Anti-Ship Ballistic Missiles (ASBMs) fly high, fast and indiscreetly. While comparatively easy to detect on radar or with satellite-based sensors, ASBMs may accelerate from four to ten times the speed of sound as they plunge down from the stratosphere.

Furthermore, while some cruise missile can attack ships from a distance of a few hundred miles, China’s DF-21D and DF-26B ASBMs can possibly fly over 900 or 2,000 miles away respectively. This is a longer range than the jets on a U.S. aircraft carrier can fly without in-flight refueling.

At the Zhuhai airshow in 2018, a Chinese missile manufacturer also unveiled a new short-range CM401 ASBM mountable on trucks and warships. This new missile officially has a range of 180 miles and a maximum speed of Mach 4, though some observers suspect the actual range may be much greater.

Most warships lack the fast and high-flying interceptors necessary to defend against ASBMs. However, the U.S. Navy developed and began deploying SM-3 and SM-6 missiles on its destroyers and cruisers to help protect against the ASBMs.

Yet, there remain huge challenges to exploiting the vast threat range posed by long-range ASBMs. First, they depend on the ability to rapidly acquire and relay the approximate position of a target ship—which requires a very well-oiled maritime surveillance apparatus involving satellites, patrol planes, submarine-sensors and so forth to form a kill chain connected with the launcher. China is working to develop and deploy the necessary satellites, aircraft, and undersea surveillance systems, but it’s still a formidable challenge.

Then the ASBMs itself needs its own seeker and maneuvering capability so it can track and adjust its course to hit a surface warship likely moving at 20 to 33 knots.

While ASBMs by definition have infrared or radar seekers and maneuvering fins designed to enable tracking of moving targets, it’s unclear whether the Chinese ASBMs have ever been tested on a moving target.

Certainly, the tempo of tests has been increasing, however. In 2013, satellite photos appeared to show that People’s Liberation Army Rocket Force (PLARF) had been test-firing DF-21D missiles at a carrier-sized mock target in Mongolia, with two craters “scouring” a 200-meter-long concrete “flight deck.”

In January 2019, Beijing trumpeted that it had re-deployed units of road-mobile DF-26 missiles to Inner Mongolia and Tibet “in response” to the U.S. destroyer McCampbell passing by the disputed Paracel islands. This maneuver was intended highlight how the PLARF could move its anti-ship missiles far inland and still threaten U.S. ships that in turn would lack the range to retaliate. Leveraging China’s geographic bulk also creates a huge needle-in-a-haystack problem for surveillance assets trying to locate the batteries for a counter-strike. Indeed, during the 1991 Gulf War, coalition forces had very little success hunting down road-mobile Scud missile launchers in the open deserts of Iraq.

The latest round of Chinese missile tests thus serve a dual purpose, both helping the PLARF evaluate the actual effectiveness of the ASBMs against maritime targets, while serving a notice to potential adversaries in the South China Sea that their ships are vulnerable to attack from Chinese missile batteries even when hundreds of miles away from the Chinese mainland.

Of course, it’s not clear how well those rockets performed in the latest tests, whether they were tested against a fixed or moving target, and how close or far the ASBMs stand from being a genuine operational capability. But the fact that these tests are finally being performed suggests the PLA is serious about developing a genuine capability to hold ships at risk even at very great distances from its coastline.