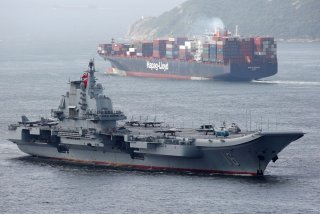 After a month of training in the South China Sea, the Chinese aircraft carrier Liaoning returned to its homeport of Qingdao last week. The South China Morning Post reported that the ship was joined by at least five escort vessels, while the recent drills were meant to highlight the fact that it remained combat-ready as its crew was unaffected by the coronavirus pandemic.

It was the longest training session conducted by the People’s Liberation Army Navy (PLAN) since it resumed all-large scale military drills in March, following the suspension of drills due to efforts to contain the spread of COVID-19.

The training was part of a routine arrangement in the annual plan, which features long durations at sea. During this time, the People’s Liberation Army website ChinaMilitary reported that the aircraft carrier’s integrated combat capability underwent testing.

“The drills have further improved the real combat training level of the Liaoning carrier strike group, putting its systematic combat capability to the test,” the PLAN posted on social media.

The Liaoning, a Chinese Type 001 aircraft carrier launched in 2012, is the first carrier commissioned into the PLAN’s Surface Force. It was originally developed by the Soviet Union as an Admiral Kuzetsov-class multirole aircraft carrier, and sold to the Chinese by Ukraine in 1998 and towed to the Dalian naval shipyard.

The first Chinese carrier has had to deal with issues beyond coronavirus. For instance, parts for regular maintenance are often lacking. The carrier is also far smaller than U.S. carriers, but with the USS Theodore Roosevelt sidelined by the spread of coronavirus amongst its crew in April, the Liaoning remained the only operational carrier in the region.

Last month the Liaoning flotilla, which included two destroyers, two frigates and a supply ship, passed through the Taiwan Strait and sailed through the Bashi Channel, a waterway to the south of Taiwan. That prompted the Taiwanese military to scramble aircraft and send warships to monitor the movements.

This was the latest show of force from Beijing as China disputes sovereignty over tracts of the sea east of Shanghai. Moreover, this demonstration was carried out while China also claims sovereignty over the entirety of Taiwan, despite the island’s self-rule and public opposition to any unification. Some 3.5 million-square-kilometers of the South China Sea are also contested by Brunei, Malaysia, the Philippines and Taiwan since those waters are rich in oil, gas and fish.