China's Aircraft Carriers Are a Paper Tiger (For Now) 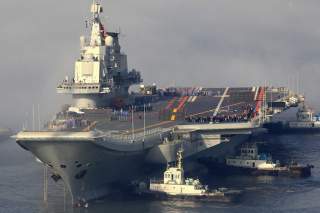 The Chinese navy on Dec. 17, 2019 commissioned into service its second aircraft carrier, Shandong. China’s leader Xi Jinping presided over the commissioning ceremony at a naval base in Sanya, on the southern island of Hainan, the ship’s home port.

With Shandong in service, the Chinese fleet now ties the Royal Navy as the second-biggest operator of carriers that are capable of operating fixed-wing aircraft. The U.S. Navy, the number-one carrier power, possesses 20 ships capable of launching and recovering airplanes.

Shandong is a somewhat improved copy of China’s first flattop Liaoning, herself a refurbished ex-Ukrainian vessel dating from the late 1980s. Shandong boasts roomier hangars and as such reportedly can embark up to 36 fixed-wing fighters, as opposed to the 24 that fit aboard Liaoning.

But the slightly bigger air wing still suffers crippling limitations that could prevent Shandong from ever playing a meaningful role in a major conflict.

It all comes down to a few simple facts. China operates just one carrier-capable fighter, the J-15. A copy of the Soviet Su-33, the J-15 is heavy. In fact, at 19 tons empty, it’s the heaviest fixed-wing carrier plane currently in service anywhere in the world. The U.S. Navy’s own F/A-18E/F Super Hornet fighter weighs just 16 tons empty.

The J-15’s weight might not be a major issue if Chinese carriers featured catapults like American carriers do. But they don’t. Instead, both Liaoning and Shandong launch their planes via a bow-mounted ramp. The ramp launch method imparts much less energy that catapult-launch can do, meaning the Chinese carriers planes must keep down their loaded weight.

The Washington, D.C. Center for Strategic and International Studies estimated the J-15’s maximum takeoff weight during carrier operations to be around 31 tons. America’s 10 nuclear-powered supercarriers with their catapults can launch planes weighing up to 50 tons.

At 31 tons, the J-15 can carry only minimal fuel and weapons. Indeed, no public photos or videos of Chinese carriers operations have depicted J-15s launching while carrying more than a few small air-to-air missiles. Realistically, J-15s wouldn’t be able to haul a meaningful weapons load into combat.

Aerial refueling somewhat could mitigate that weight limitation. But “the practice remains difficult to execute, and the [Chinese navy’s] refueling capabilities are not yet fully developed,” CSIS explained.

Chinese officials are well aware of the J-15’s problems. “Its weight is one of the key reasons military leaders have pushed for the use of an electromagnetic aircraft launch system – rather than steam-powered catapults – on China’s third carrier, which is currently under construction,” South China Morning Post noted.

But even launching via catapult, the J-15 could prove to be a dog -- especially if the catapult is steam-powered. “If China insisted on using steam-powered catapults to launch the J-15, it would look like forcing a toddler to run with [Chinese hurdler] Liu Xiang and [Jamaican sprinter] Usain Bolt,” an unnamed expert told South China Morning Post. “That would be so embarrassing!”

China like the United States is working on more efficient electromagnetic catapults. The Chinese navy reportedly plans to install the electromagnetic launchers on the country’s third carrier, which could commission in the mid-2020s. Beijing reportedly aims to acquire just four carriers including Liaoning and Shandong.

In a 2017 interview with China Central Television, Chinese navy rear admiral Yin Zhuo, a senior researcher at the fleet’s research center, said China had complete “hundreds of [land-based] tests” with the new catapult and J-15s. But the electromagnetic catapult is a new technology and has proved difficult even for the Americans to build. It’s unclear whether China’s version of the catapult will be ready in time for the third carrier’s launch.

Under the best of circumstances, China’s future carrier fleet with its four flattops will include at most two vessels that are capable of launching J-15s with full loads of weapons and fuel. The other two carriers will continue launching fighters that are too heavy for their ramps and thus incapable of hauling the weapons and fuel they’d need in order to actually contribute to an aerial battle.