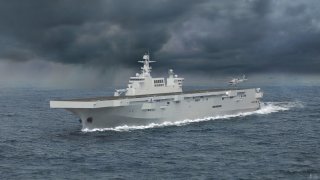 On one side of the Pacific, the U.S. Navy's Wasp-class amphibious assault ship USS Bonhomme Richard (LHD-6) is in ruins in San Diego and will not be able to return to duty anytime soon if ever. Across the Pacific, the similarly-sized Chinese People's Liberation Army Navy's first Type-075 assault carrier is about to start sea trials.

The circumstances are in no way connected, but this is a moment that could be remembered in the decades to come. The U.S. Navy has to recover from an extremely costly disaster while China can highlight to the world its latest accomplishment.

The Type-075 represents a major step-change in the PLAN's amphibious warfare capabilities, and it will provide China with better over-the-horizon landing capabilities and improve air cover. As The National Interest previously reported this new class of Chinese warships will enable the Chinese to launch assaults and to get air support much in the same way as the U.S. Navy's Wasp-class and America-class LHDs. This class of warship combines the functions of a helicopter carrier and transport docks and can thus deploy landing craft, hovercraft, helicopters and vertical-launching fighter aircraft while also being able to transport hundreds of soldiers or marines.

The Type-075 has a well-deck to deploy Type 726 hovercraft, considered to be the equivalent to the U.S. Navy's LCAC (Landing Craft Air Cushion), while it will also have a large rotor-wing component, NavalNews.com reported. This could include the Z-8 transport helicopter, which is based on the French SA 321 Super Frelon, but reports have also suggested more modern types of helicopters have been deployed on the warship including a variant of the Harbin Z-20, a copy of the Sikorsky S-70 Black Hawk/Sea Hawk.

The Chinese vessel, which is only now setting sail for the first time since it was floated on September 26 of last year, has been undergoing its fitting out. Recent photos have shown the vessel being fueled in preparation for its sea trials.

Worth noting too is the fact that the Chinese assault carrier also suffered a fire incident this past April, but it was apparently put out quickly and didn't affect the integrity of the vessel. Yet, as The National Interest reported, "Massive scorch marks were visible on the stern and appeared to lead into the well deck, implying that the fire had potentially originated (or possibly spread) into the belly of the ship." Unlike in the case of the USS Bonhomme Richard however, the Chinese warship was quickly repaired and readied for sea trials. Still, smoke stains from the fire reportedly remain visible in the aft port-side near to the ramp.

Even as the first Type-075 begins sea trials, the Hudong-Zhonghua shipyard in Shanghai, where the lead Type-075 was constructed, has already launched a second ship. Beyond the capabilities of the warships, what is remarkable is the time in which the vessels are being constructed. Amidst of a global pandemic China has not slowed the progress in the production of its new warships, which makes the fire on the USS Bonhomme Richard all the more troubling for the U.S. Navy.