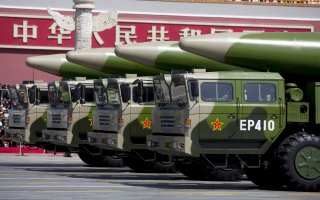 A Defense Department’s report on the People’s Republic of China’s (PRC) military raises the possibility that its Army may convert its Dong-Feng 26 (DF-26) anti-ship missile into a low-yield tactical nuclear weapon.

The DF-26 is reportedly capable of hitting large Navy surface platforms with precision guidance from up to two thousand miles away.

“The DF-26 is the PRC’s first nuclear-capable missile system that can conduct precision strikes, and therefore, is the most likely weapon system to field a lower-yield warhead in the nearterm,” according to the report, titled Military and Security Developments involving the People’s Republic of China. “PRC military writings in 2012 noted that the introduction of new precise small-yield nuclear weapons could possibly allow for the controlled use of nuclear weapons.”

There has been much discussion about a “limited” or “targeted” nuclear engagement using tactical, lower-yield weapons following Russia’s violation of the Intermediate-Range Nuclear Forces Treaty and pursuit of low-yield nuclear weapons. These developments were likely part of the rationale for the Trump administration’s 2018 Nuclear Posture Review. The review advocated for a large-scale effort to build low-yield nuclear weapons such as a submarine-launched, nuclear-capable cruise missile and a reconfigured submarine-fired Trident II D5 armed with low-yield warheads. Former Defense Secretary James Mattis once said that the review called for new low-yield weapons as a means of bringing Russia back to the negotiating table following its INF violations. The Defense Department’s report makes it clear that China took notice of the threat.

“PRC concerns began to emerge that the United States would use low-yield weapons against a Taiwan invasion fleet, with related commentary in official media calling for proportionate response capabilities,” the report states. “PRC strategists have highlighted the need for lower-yield nuclear weapons in order to increase the deterrence value of the PRC’s nuclear force, though they have not defined specific nuclear yield values.”

Low-yield weapons have generated vigorous debate in recent years. In fact, some members of Congress have raised the concern that they could “lower the threshold” to nuclear war. Meanwhile, others have maintained that low-yield weapons are crucial to sustaining an effective nuclear deterrence posture.  Fundamental to this discussion is the issue of “proportional response.” Some people argue that the use of any nuclear weapon on any scale should be met with the promise of a large-scale catastrophic response aimed at complete destruction. By contrast, others argue that an ability to launch a limited, proportional response introduces counterattack options for military commanders and strengthens the U.S. deterrence posture.

This new paradigm may have prompted “PRC nuclear thinkers” to reconsider “their long-standing view that nuclear war is uncontrollable,” according to the report.