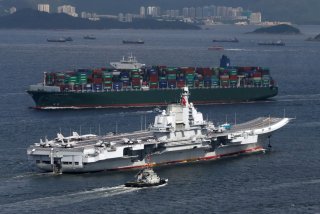 Even as the U.S. Navy's newest aircraft carrier, the USS Gerald R. Ford (CVN 78), prepares for her first deployment, on the other side of the world China’s People’s Liberation Army Navy (PLAN) is preparing its first domestically built aircraft carrier for service. This week, the Shandong set out from the shipyard for military exercises in the Bohai Sea, which could last some twenty days. Experts expect the carrier to integrate with the J-15 fighter jets that were newly produced specifically for the warship. Z-18 helicopters were also reportedly seen on the flight deck.

According to numerous reports the Chinese carrier, which entered service on December 17 of last year, could become combat-ready by the end of this year. Shandong has been assigned to the PLAN's South Sea Fleet, which is based in Sanya, but despite that fact the carrier has remained in the northeast region of China with the crew confined to the ship at the height of the coronavirus pandemic.

The warship took part in a twenty-three-day drill in the Bohai and Yellow Seas in May and June.

It is believed the Shandong will carry out aerial training in the Bohai Sea during this month's exercises. Additional People's Liberation Army (PLA) and PLAN drills have been taking place in the Yellow and Bohai Seas as part of ongoing exercises amidst the ongoing tensions with the United States.

Last month, a U.S. U-2 spy plane entered a no-fly zone in the region during Chinese exercises, which prompted a protest from Beijing.

While domestically built in the People's Republic of China, the Shandong is based on the Soviet-era Kuznetsov-class Project 11435 aircraft carrier that was developed in the late 1970s and early 1980s. The first of the class, Admiral Kuznetsov, remains in service with the Russian Navy and is currently undergoing a refit during which a fire broke out. The Russian carrier isn’t expected to return to active operations until 2022 or 2023 at the earliest.

The second hull to be laid down was not commissioned when the Soviet Union dissolved in 1991, and the ship was then sold to the PRC, originally for use as a “floating hotel and casino” but was overhauled and completed as the PLAN's first aircraft carrier Liaoning. It reportedly took six years for the carrier to reach its full capacity after delivery in 2012. The carrier has been conducting regular operations in the South China Sea this year.

The Shandong was laid down in 2013 at the Dalian naval shipyard and she was launched in late April 2017. Sea trials began a year later, and the ship was commissioned on December 17, 2019. The commissioning of the 315-meter long vessel four years after she was laid down in Liaoning province March 2015 by Dalian Shipbuilding is another milestone achievement for the PLA Navy that must be gauged in context: the Chinese carrier remains much less capable than its U.S. Navy counterparts, but serves as a stepping stone to a more powerful force, a point of national prestige, and potentially a platform for expeditionary missions abroad.