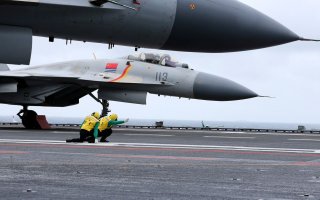 The first domestically-built Chinese aircraft carrier, Shandong, is now undergoing sea trials, China state television reported this past weekend. The carrier, which is named for China’s Shandong Province, was delivered to the People’s Liberation Army Navy (PLAN) in December at the naval port in Sanya in Hainan Province.

Military analysts have suggested that the carrier remains much less capable than its U.S. Navy counterparts, but it serves as a stepping stone to more powerful carriers. Moreover, it has been seen as a symbol of national prestige, one that could be used as a potential platform for expeditionary missions abroad. It is China’s second aircraft carrier, but its first carrier, the Type 001 Liaoning was rebuilt from the hull of the incomplete Soviet-era “aircraft-carrying cruiser” Varyag.

The Shandong had left her home port of Dalian in late May on her maiden voyage for training since being commissioned five months ago. The current sea trials are reportedly to test the performance of weapons and equipment, as well as to improve the level of aircraft carrier training but also to further enhance the crews’ ability to perform missions and tasks.

While domestically built, the 55,000-ton Shandong is still a modified version of the Liaoning, which means it shares not only a similar layout but also many of the limitations. The carrier lacks catapults and instead launches planes via a bow-mounted ramp—something that significantly limits the weight of the aircraft as well as how much weaponry and even fuel that those planes can carry.

The Shandong does have design improvements that will enable it to embark and operate a larger air wing of 40 aircraft, including 36 fighters. China’s primarily carrier-based fighter is the J-15 Flying Shark, an aircraft that is derived from the Russian Su-33 Flanker aircraft design. The multirole fighter jet, which entered service in 2015 and has been compared to the U.S. Navy’s two-seat FA-18 Super Hornet, was designed to operate from carriers equipped with a ski ramp rather than from a catapult.

According to Navy Recognition, China has also reportedly announced plans to develop a carrier-capable variant of its J-20 fifth-generation stealth fighter and/or a carrier-capable variant of its FC-31 fifth-generation stealth fighter to complement or succeed the J-15 on catapult-equipped Chinese carriers. The J-20 is Chinese flagship stealth fighter, and its weapon systems were spotlighted at the 2018 Zhuhai Airshow, while the FC-31is noted for relying on design elements from other countries fighter programs—notably the United States’ F-35 Joint Strike Fighter.

The Chinese military is also reportedly developing a carrier-based stealth drone aircraft that could be used on the carriers.

The PLAN has also announced that it may deploy both the Shandong and the Liaonging for the first in exercises to be conducted this summer—but both carriers conducted combat readiness last month in the Yellow Sea.