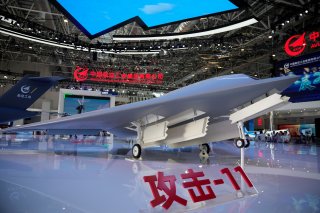 The People’s Liberation Army Air Force will showcase the internal weapons bays of the GJ-11 Sharp Sword stealth armed reconnaissance drone at an airshow in Zhuhai, China this week. This will be the first time the GJ-11’s internal weapons bays have been displayed to the public, according to the Global Times, a Chinese government-backed newspaper.

The made its first public appearance in 2019. Both of its internal weapons bays are positioned between the landing gear of the drone, which has a flying wing design. Each bay is capable of carrying four weapons, according to the Global Times.

China’s development of a stealth drone capable of carrying out attacks may appear to be cutting-edge technology. Stealth drones and armed drones have existed for many years, but a drone that combines stealth with the ability to attack is unusual. However, there is precedent for such a platform.

The U.S. Navy developed a stealth attack drone capable of operating from an aircraft carrier several years ago. The Unmanned Carrier Launched Airborne Surveillance and Strike program (UCLASS) derived from a lengthy effort that began with the Unmanned Combat Air System Demonstrator program. The result was the X-47B, a stealthy carrier attack drone with a flying wing design. China’s GJ-11 appears to mirror the configuration and mission scope of the former U.S. Navy program.

The UCLASS program successfully managed the complex variables associated with landing on an aircraft carrier, but other obstacles soon appeared. Its dual capability of conducting stealthy reconnaissance and attack created a wall of debate. Some developers argued the aircraft needed to remain stealthy to defeat enemy air defenses. Others felt it needed to be larger, bulkier, and therefore less stealthy to carry large fuel tanks for longer-dwell missions. There was also debate about whether UCLASS should be an armed strike drone. Building a stealthy drone able to take off and land from a carrier was a tremendous breakthrough for the Navy, and proposing to arm it extended the curve even further.

Ultimately, these debates were never resolved. The program wound up evolving into what is now the MQ-25 Stingray aerial refueler drone. The X-47B program is remembered as a success because a carrier-launched drone did not exist until the demonstrator emerged. It is still possible that an armed, carrier-launched stealth drone like the X-47B could return. It has the potential to fill several important roles.

It seems unlikely that China’s GJ-11 could operate from aircraft carriers. However, it would be a safe bet to assume the Department of Defense is taking careful note of the GJ-11’s capabilities that will be on display this week.