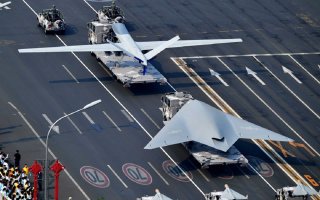 The Gongi-11 drone, reported to have first emerged in 2019, was on display recently in a Chinese National Day parade, revealing a blended wing-body stealth exterior similar in design construction to a B-2, B-21 or RQ-170 Sentinel stealth drone.

Believed to be in existence for more than a decade, the RQ-170 seems to represent future drone developmental trajectories as unmanned air platforms will increasingly need to be stealthier, a reality often discussed by senior Air Force weapons developers.

As for this new Chinese stealth drone, which may not-surprisingly be somewhat of a copy or rip-off of the U.S. Sentinel or X-47B demonstrator.  The Chinese have a well-documented and easily observed habit of producing new weapons platforms bearing a very close resemblance to U.S. systems several years after they emerge.

An available image of the Gongi-11 drone printed in China’s propaganda newspaper, the Global Times, shows a stealthy configuration that seems to resemble artistic renderings of the RQ-170 Sentinel stealth drone. However, only the top of the Gongi-11 is visible, so it is less clear if the drone has weapons pylons or what might look like an internal weapons bay. Of course, external hardpoints for weapons will generate a much more discernible radar return signature, yet some type of internal carriage might be within the realm of the possible.

The existence of this drone also somewhat interestingly appears to mirror the configuration and possible mission scope of a former U.S. Navy program to deploy a first-of-its-kind armed, carrier-launched stealthy drone called Unmanned Carrier Launched Airborne Surveillance and Strike program (UCLASS). The aircraft, which evolved out of a multiyear developmental effort to build the X-47B demonstrator, a pioneering breakthrough platform to build and operate a never-before-seen stealthy carrier attack drone. The success of the program, which drew from the collective expertise of engineers, stealth experts and Navy scientists to build a drone able to manage the complex variables associated with landing on a carrier, gave rise to the UCLASS effort.

The UCLASS drone ran into an interesting predicament, as it was intended, much like the new Chinese drone, to bring the dual-advantage of combining stealthy reconnaissance and air attack weapons capability into a single platform. The program collided into a wall of debate, with some developers arguing that the aircraft needed to remain stealthy like the X-47B to defeat rival air defenses, yet others felt it needed to be larger, bulkier and therefore less stealthy to carry large fuel tanks in order to conduct longer-dwell missions without needing to return or refuel.

Ultimately, the platform never did quite seem to reconcile these positions or recover from this conceptual collision and wound up evolving into what is now the MQ-25 Stingray aerial refueler drone.

It is not clear that the new Chinese Gongi-11 can launch or operate from sea, as that is not likely, however it does bring a rare blend of attributes not likely to be matched by other countries. Many countries naturally have armed stealth fighters, yet armed stealth drones have not really emerged. Of course, the United States operates several strike drones such as the less-stealthy MQ-9 Reaper, yet available info on the RQ-170 suggests it is unarmed. It can be difficult to optimize a blend of what might be tough to combine characteristics, as weapons pylons or weight and size-adding internal weapons bays can make the engineering of a super stealthy platform more challenging.

Surveillance drones have existed around the world for years, armed drones, while less common, exist as well. Stealthy drones even exist, to some extent. Combining all of these features into a single platform, however, is both challenging and very interesting. To what extent has China truly accomplished this?

Such a weapons platform would certainly bring a certain immediacy to attack operations and likely greatly decrease sensor to shooter time, image transmission to fire control latency as well as of course targeting and precision attack in heavily defended areas.