Is China's Hypersonic Weapons Development Leaving the U.S. In the Dust? 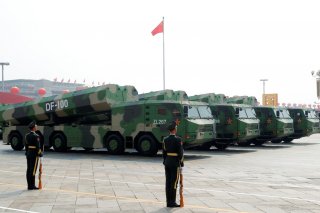 Sound crazy? Maybe not, according to a report in the Asia Times which says Britain’s The Sun newspaper is reporting that China has built a hypersonic wind tunnel in Beijing. Proponents say this tunnel could put their military modernization efforts decades in front of the U.S. The paper quotes scientists from the Chinese Academy of Sciences claiming that the innovation, which involves “simulating” flights at those speeds, puts China as many as 30 years ahead of other great powers.

“Such futuristic aerospace technology could make it possible for super-fast jets to fly anywhere in the world in two hours or less,” the Asia Times writes.

The Asia Times report goes on to cite several of the technologies believed to be responsible for what some are calling a paradigm-shifting breakthrough.

It may not be clear just how close this may be to any kind of operational status or even early prototyping as the scientific advances are reported to be in the realm of simulation. However, simulations such as digital engineering, something employed with great effect by the U.S. Air Force, can prove quite accurate when it comes to replicating weapons performance.

As for the potential impact upon combat created by weapons traveling at those speeds, there are likely too many variables to consider.  Initially, the question of instant global reach is quite pressing, should it be true that a hypersonic vehicle traveling at 30-times the speed of sound could reach any location on earth within 2 hours or less.  That certainly introduces new dynamics to the question of deterrence or counterattack, the most pressing of which may simply be that a country in sole possession of this technology could be positioned to quickly ensure military overmatch.

Essentially, the military advantages afforded by this possibility could easily place a country in a somewhat defining position of superiority, given the extent to which a technology of this kind could upend the current status quo or balance of power.  Such a possibility would likely mean many things, including an ability to launch weapons in space, conduct missile defense operations or simply remove the need for certain deterrence forces to forward position in close proximity to potential target areas. If anywhere in the world could, in virtually any circumstance, be struck almost instantly, attack forces might not need to operate within specific ranges to hold an area at risk.