China's J-20 Mighty Dragon Stealth Fighter Has An Engine Problem (Or Not?) 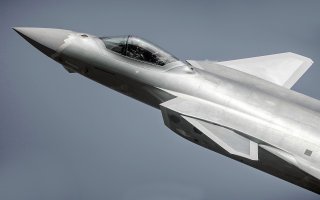 Exactly how mighty these aircraft remain a matter of debate, for many reasons.

Beijing has certainly invested a lot of time, nearly two decades, developing the aircraft – yet the Mighty Dragon doesn't seem so mighty whenever its engines have been discussed.

The fifth-generation fighter, which was meant to be a symbol of Chinese aerospace progress and the advances it has made in recent years, is actually equipped with Russian-made engines. China has attempted to move away from the use of the Saturn AL-31F engines but it could be a couple more years before the domestically produced WS-15 engines are finally ready for the J-20.

In development since 2005, the new engines could enable the J-20 to "supercruise" – sustain supersonic flight without the use of afterburners. Yet, the engines aren't close to cruising to the finish line. The WS-15 even failed its "final" evaluation in 2019, which has been part of the ongoing delays.

The currently used Saturn Al-31 engines were designed for fourth-generation aircraft and as a result, the J-20 was far less agile than the fifth-generation fighters employed by the United States military. However, in recent years China has made some progress with its engines, and that included the WS-10C Taihang engine, which has been used as a stopgap when the "bugs" are being worked out of the WS-15. The WS-10C is an advanced version of the older Shenyang WS-10 turbofan engine.

China rushed out the aircraft in 2017, originally with the Russian-built Saturn AL-31F, when U.S.-Chinese relations took a turn for the worse in 2017 during then President Donald Trump's trade war with Beijing.

According to a Chinese military source, the purpose-built new engines, which were specifically designed for the fighter and were designed to improve its maneuverability and combat capabilities, could finally be ready within the next two years.

"The development of WS-15 is nearly complete," an anonymous military source told The South China Morning Post, adding, "Or may be finished within one or two years."

It was also suggested that while the project had fallen behind schedule – by more than a decade – the eventual updated J-20 could be "on par with the American Lockheed Martin F-22 Raptor."

Whether that is actually true or not has yet to be seen, and it will be at least two more years before the actual capabilities of the Mighty Dragon will finally be determined. Yet, even with the engine debacle addressed, the other issue will be whether China can actually produce the aircraft in significant numbers.

The PLAAF has a reported fifty J-20s in service, and Chengdu Aerospace Corporation (CAC) has announced it would produce an additional fifty aircraft by the end of this year. Even reaching that number could be a challenge, according to one Chinese military insider.

"But compared with the Lockheed Martin production line, which is able to deliver more than 100 F-35s every year, each of the CAC's [four] production lines only has the capacity to make about one J-20 a month," the source added to The South China Morning Post last week.