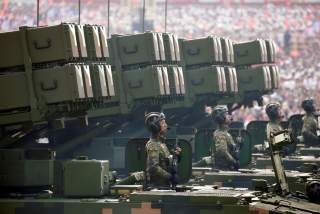 Faced with increasing competition from a China determined and able to pursue concerning scenarios such as coercion of Taiwan as never before, the United States can no longer afford to pursue only the costliest technologically superior, but operationally defensive, approaches of the past. Rather, it must increasingly take pages from China’s own post-Cold War playbook. And expanding emphasis on missiles is one of the most potent pages yet written: Washington’s INF withdrawal offers important possibilities.

A Martian strategist reviewing Earthly conditions for the first time today might well ask why the United States had watched China’s missile might grow so fast and alter the military balance so much, while making so few missile moves of its own. They would doubtless note that China had not only deployed the world’s most numerous and diverse land-based missile force, but also stuffed its submarines to the gills with conventional missiles, even at the expense of torpedoes. They might ask why the United States had voluntarily kept its missiles off land in East Asia, and moreover heretofore armed its astronomically expensive submarines primarily with nuclear missiles but few conventional missiles. (Encouragingly, the Block V Virginia-class attack sub will have six large-diameter tubes that could hold a total of 42 Tomahawk cruise missiles.) They might note that many INF-related arms control concerns were decidedly Eurocentric at a time when many of the most dramatic and destabilizing military developments were occurring unrestrained in Asia. Such an outside observer might well rapidly comprehend the INF-imposed constraints on U.S. deterrence and operations in the Asia-Pacific.

Unshackled from INF, what can the United States do now? First, it can resume development and testing of medium- and intermediate-range missiles that don’t require Navy or Air Force platforms to deploy and employ. Testing has already begun on a ground-launched variant of the Tomahawk, allowing deployment within approximately 18 months. The U.S. will eventually test a new mobile, ground-launched intermediate-range ballistic missile (IRBM). Lacking the Tomahawk’s long-proven heritage, or any post-INF American analogue, this 3,000-4,000-km-range missile will likely take several years to develop.

Second, the United States can begin to deploy land-based cruise and ballistic missiles as they become available. The most realistic and promising Asia-Pacific location is the sovereign American territory of Guam, together other Pacific possessions. Australia, Japan, South Korea, and the Philippines are also potential locations. To be sure, smaller islands may be limited in concealing terrain, and foreign missile hosting may face popular pushback. So initial deployment may well be confined to Guam. But whatever limits the United States may experience in basing ground-launched missiles abroad, it can still pursue agreements with allies and partners to allow the rapid introduction of missiles in various contingencies to support their defense.

Third, in the arcane world of military deterrence, increasing options and room for maneuver forces competitors and potential adversaries to think in new ways by factoring in potential capabilities and actions. Simply by withdrawing from INF, Washington has put new options on the table. Russia remains free to work with the United States to limit nuclear weapons—as well as emerging hypersonic and undersea nuclear weapons and its uniquely hazardous nuclear-powered cruise missile program, none of which are currently limited by any agreement. And if Beijing eventually sits down at the arms control negotiating table at all—rather than expecting others to make all the concessions, as before—it will be because Washington allowed itself new options, not because it further tied its hands unilaterally. Chinese state spokespeople and media are already decrying U.S. IRBM development and pressuring the U.S. and its allies, but should be paid no heed. Washington should not be swayed by one-sided propaganda embodying the hypocritical notion that “The magistrates are free to set fires, while the common people are forbidden even to light lamps.”

These steps represent one of the most straightforward ways to advance U.S. security and regional interests by reclaiming the right end of physics and cost competition regarding advanced weapons, reassuring regional allies and partners, deterring Chinese aggression, and enabling options for addressing any security threats that do materialize.

The bottom line: a new U.S. posture involving some mobile conventional IRBMs on Guam, and some capability to deploy them on relatively short notice to other locations, will offer a reasonably useful if relatively limited set of options. It will complicate Chinese military planning and have deterrent effect. With an increasingly assertive Beijing bullying its neighbors and pressuring the U.S. and its allies to yield to unilateral demands, resetting the military missile calculus will be a victory in itself. And, as China’s 70th anniversary military parade just made it unmistakably clear, the time to act is now.

ANDREW S. ERICKSON is a Visiting Scholar at Harvard’s Fairbank Center for Chinese Studies and a Professor of Strategy at the Naval War College. He is the author of the book Chinese Anti-Ship Ballistic Missile (ASBM) Development: Drivers, Trajectories and Strategic Implications.