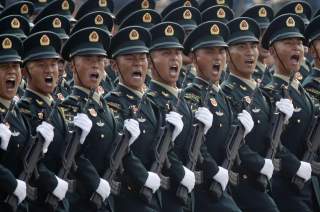 Key point: China keeps proving it is too powerful and dangerous for its neighbors to ignore.

The massive military parade on the 70th anniversary of the founding of the People’s Republic of China generated a huge amount of interest, mostly because of the slew of new military capabilities on display. The parade in Beijing demonstrated the cutting edge of the Chinese state’s military capability, with some key weapons systems on show that haven’t been seen before.

These new military capabilities—once deployed operationally—will increase the Chinese state’s ability to undertake anti-access and area-denial (A2/AD) operations so that it can deter and deny US and allied military intervention into the western Pacific in a future crisis.

Most notable was the DF-17 hypersonic glide vehicle. An HGV is launched by a traditional ballistic missile and then follows a flight path within the atmosphere, at velocities of up to Mach 10 (approximately 12,350 kilometres per hour). HGVs are designed to manoeuvre in a way that enables them to evade ballistic-missile and naval air-defence systems. Although the DF-17 could carry a nuclear warhead, it’s more likely to carry a conventional one in order to maximise the system’s operational utility. The system on display was atop a DF-16, which normally has a range of between 800 and 1,000 kilometres; the HGV would extend that somewhat.

China’s deployment of the DF-17, along with Russia’s deployment of its Avanguard HGV, means the US is trailing both its peer adversaries in this critical capability area. The US is focusing its efforts on deploying a ‘common HGV’ that could be launched from land, sea and air platforms as early as 2023.

Systems like the DF-17 need effective and timely intelligence on possible targets like US aircraft carrier battlegroups, for example. The WZ-8 rocket drone is designed for very high altitude supersonic flight and could fill this role. Two WZ-8s were on display during the parade. The drone shouldn’t be confused with the GJ-11 ‘Sharp Sword’ unmanned combat aerial vehicle, which was also shown for the first time. The WZ-8 is a rocket-powered reconnaissance platform designed to be air-launched and operate at approximately 46 kilometres above the earth (that’s halfway to space). Tyler Rogoway of The War Zone estimates that its airspeed at altitude would be 5,287 kilometres per hour, or around Mach 4.5.

The WZ-8 would act as high-speed eyes for long-range A2/AD systems such as the DF-17 or the DF-26 anti-ship missile. It could cover a large maritime region quickly, identify a target, and share that information with ‘shooters’ such as People’s Liberation Army Rocket Force ballistic missile units. Its high altitude, high speed and stealthy design would make it virtually impossible to intercept.

Another interesting weapon system on show was the YJ-100 cruise missile. This appears to be a ground-launched system that would fly at high supersonic or hypersonic velocities to strike either land- or sea-based targets. Analysis in The War Zone suggests it’s a large two-stage missile, with an air-breathing ramjet for long-range, high-speed flight.

In the air, the PLA Air Force flew a formation of H-6K and H-6N bombers. The H-6N is the most interesting platform to consider, given that it has an airborne refuelling capability and is reputed to be able to carry an air-launched ballistic missile known as the CH-AS-X-13, which is thought to be based on the ground-launched DF-21D anti-ship ballistic missile system.

Such a capability would give China the ability to launch ALBMs from beyond the first island chain at an opponent’s naval carrier battlegroups or land bases. The CH-AS-X-13 is reported to have twice the range of the DF-21D, and could strike targets about 3,000 kilometres further on from its launch from an H-6N, which itself has a range of 6,000 kilometres.

All of these new capabilities were accompanied by other systems that have been displayed before, including the DF-26 and the YJ-18 long-range anti-ship cruise missile, as well as a plethora of long-range nuclear missiles. Among those was the DF-41, which went on show for the first time, and is considered the world’s most powerful intercontinental ballistic missile, supplanting the Soviet Union’s SS-18 ‘Satan’. Large numbers of tanks and armoured vehicles, electronic warfare capabilities, and mobile surface-to-air missile systems were also on show.

Watching the PLA showcase its new hardware was interesting, but the key issue to consider is the military and strategic implications of the parade. Is there a policy ‘so what’ for Australia and others to all this Chinese military grandiosity?

First, while Beijing’s diplomatic representations to Canberra argue that we should eschew ‘Cold War mindsets’, nothing screams a Cold War mentality more than nuclear missiles rolling through Tiananmen Square.

Second, the 70th anniversary parade wasn’t about the success of the Chinese people but about the continued dominance of the Chinese Communist Party over the people. Parading vast military power sends signals of both weakness and strength. The emphasis by President Xi Jinping was on the PLA as the party’s army and its function in maintaining the CCP’s—and his own—grip on power. Having to demonstrate that power to both the Chinese people and the international community suggests regime insecurity, even in a newly developed state like China, which boasts an economy second only in overall size to that of the US.

At the same time, the new capabilities on display can’t be dismissed as inconsequential for the US and its allies. It’s important that Australia, along with the US and its strategic partners, begins to consider how to contend with some of these advanced military capabilities.

Finally, those planning the future structure of the Australian Defence Force should take on board the key systems that were on show in Beijing. In particular, it’s clear that China is seeking to enhance and extend its A2/AD capability in a manner that will make it more difficult for the US and its allies, including Australia, to project power throughout the Indo-Pacific.

How the ADF responds to the increasing range, speed and striking power of Chinese air, naval and missile capabilities has to be a key priority for our defence planners and should affect our thinking about our own naval and air operations in the region. The parade is a wake-up call that we ignore at our peril.