China's Navy Is Bigger than the U.S. Navy. But Can It Fight? 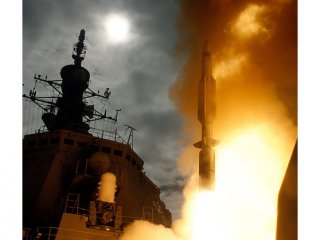 If China succeeds with its plan to double its fleet of destroyers from 20 ships up to 40 in just the next five years, many may marvel at the pace at which the country is adding warships, yet also pause to wonder about just how capable these ultra-fast-tracked or “rushed” warships may be. Are they being rushed?

Or is the Chinese shipbuilding infrastructure so robust that it can produce major quantities and unparalleled quality simultaneously?

While the U.S. already operates more than 60 Arleigh Burke Class DDG 51 destroyers, China’s Navy is already larger than the U.S. Navy, a fact which in part inspires the current U.S. Navy wish to reach a 500 ship service.

The Chinese Navy, now having at least 360 ships, has already well surpassed the U.S. Navy’s 297 ships in terms of sheer size, according to a recent Congressional report. A May 2020 Congressional Research Service Report, “China Naval Modernization: Implications for U.S. Navy Capabilities,” maps out China’s ambitious surface fleet, submarine, and aircraft carrier modernization plan. The People's Liberation Army - Navy, the report says, will likely have 400 ships and three-to-four aircraft carriers by 2025.

However, how crucial are sheer numbers of ships when weighed against the merits of precision weaponry, long-range sensors, drone operations, and advanced command and control?

Ultimately it is the technology that matters most. The merging of long-range sensors, precision-guided weapons, laser weapons, and electronic warfare systems with a hardened, multi-domain network and integrated ship defenses will prove to be much more significant than sheer numbers of ships. Imagine if U.S. destroyers could have longer-range weapons, more sensitive radar, better maneuvering cruise missiles and an ability to detect enemies from beyond the horizon before they are themselves seen. If the U.S. Navy could do that, then it seems they could achieve military overmatch with fewer numbers of actual ships.

Therefore a margin of Naval superiority when comparing the U.S. to Chinese destroyers may reside in the range and precision of its sensors, ship defenses and long-range missile capabilities. Do China’s new Type 055 somewhat stealthy destroyers and growing fleet of Type 052 destroyers truly pose a threat to ships like the USS Zumwalt or emerging U.S. Navy DDG 51 Flight III destroyers?

China’s new Type 055 destroyers are, according to a report in The Diplomat, are armed with an eleven barrel H/PJ-11 30mm Close-in-Weapons Systems for ship defenses, just as the U.S. Navy DDG 51 does. However, the margin of superiority may well be established long before any threat gets close enough to require a close-in defense system, as it will likely be determined by the ranges at which approaching threats can be discovered and the effectiveness of the interceptors and defenses employed to destroy them.