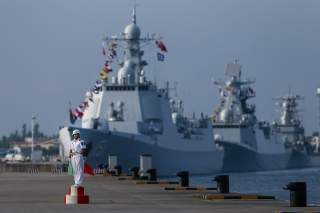 China’s navy has a new problem: not enough names for its rapidly growing fleet of warships.

“China is running out of provincial capitals to name new destroyers, and it might have to turn to other big domestic cities, which reflects the country's rapid naval development in recent years,” according to Chinese newspaper Global Times.

The People’s Liberation Army Navy recently named its first Type 055 destroyer the Nanchang, which is the capital city of East China's Jiangxi Province.

One of the three other Type 055 destroyers will be named Lhasa, the capital of Southwest China's Tibet Autonomous Region, according to Chinese media. That just leaves Nanning and Taipei as the names of provincial capitals for destroyers (Taipei is Taiwan’s capital, though Taiwan has not yet declared independence as a separate nation from China).

Which means non-capital cities will have to bequeath their names to Chinese destroyers. The latest destroyer is named Qiqihar, which is a non-capital city in in Northeast China's Heilongjiang Province. A few ships have been named after major cities, such as the Shenzen, a Type 051 destroyer.

“Chinese destroyers and frigates should be named after big and medium Chinese cities, according to the naval vessels naming regulation,” Global Times said. “This means naming of destroyers does not necessarily have to use provincial capitals, as it was a non-binding tradition.”

Li Daguang, a professor at the National Defense University of the PLA, told the Global Times that “the naming issue reflects the rapid development of the PLA Navy in recent years. While new destroyers might have to use names of big cities other than provincial capitals, older destroyers that use provincial capital names might be decommissioned in the future and their names could be used again on newer ships.”

China, like all navies, has naming conventions for its naval vessels (see an English translation of the naming rules from 1986 here). As the largest warships in the Chinese navy, not surprisingly carriers are named after provinces, with China’s first carrier christened after Liaoning province. Nuclear submarines are named Changzheng (“Long March,” signifying an epic Communist retreat in the 1930s), followed by a pennant number. Smaller surface ships are named after counties, rivers and mountains.

“The general principle is: the name is different from the names of ships in other countries and regions in the world,” according to Chinese naval regulations,. “It is different from the names of domestic ships; it is strong and easy to remember; the words are clear and not easy to be confused with each other; the name is loud and meaningful, and it can reflect the dignity of the motherland. It shows China's long history and culture; it can withstand the test of history, and it can be used for a long time, and it can meet the needs of equipment development for a long time.”

In contrast, U.S. warship names can be quite confusing. Through World War II, battleships were named after states, and aircraft carriers named after famous Revolutionary War battles or warships from that era. Once battleships disappeared, it would seem logical that carriers should be the heir of state names, except that now it is nuclear ballistic missile submarines that bear the name of states, while carriers bear the names of presidents (Truman, Lincoln, Ford) and admirals (Nimitz).