China's Navy Is Rising Fast: Can It Catch the U.S. Navy in Lethality and Size? 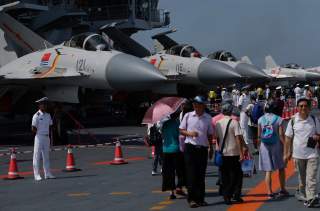 All fitted out, China's second-ever aircraft carrier — and the first built entirely in China — is set to sail for sea trials. The construction of the aircraft carrier represents a significant milestone in China's steady rise as a major naval power. And barring any hiccups, Beijing will continue its ascent in the following decade to the degree that it challenges the United States for naval supremacy – at least in East Asia.

From a Coastal Defense Force to a World Power

The might of the Chinese navy today is far beyond what it was just 30 years ago. As recently as the 1990s, it was effectively a coastal defense force with little ability to challenge its U.S. counterpart. But quick as the Chinese navy's rise since then has been, its tremendous progress stems from evolution rather than revolution, as Beijing has carefully and incrementally introduced new designs and equipment into the navy before proceeding to intensified shipbuilding.

At the turn of the millennium, Beijing began producing new indigenous vessels, but many of the initial designs, such as the Type 051C destroyer, depended heavily on Russian and other foreign technology for their main armaments. At the same time, China continued to purchase Russian warships, such as Sovremenny-class destroyers and Kilo-class submarines, as a hedge against the potential failure of their new designs.

Over the course of the century's first decade, China restricted itself to constructing small batches of each warship type; only after engaging in comprehensive testing for each type did the country slowly transition to improved designs. This decade of cautious experimentation gave the country’s navy the confidence to settle on reliable models for high-rate production. Chinese shipyards rapidly rolled out the Type 054A frigate, the Type 039A submarine, the Type 052D destroyer and the Type 056 corvette, making the four classes of vessel the mainstay of the naval inventory. Such production, however, did not necessarily increase the size of the fleet but replaced aging and obsolete vessels that had remained in the naval inventory since the 20th century.

As naval authorities complete this modernization drive over the next two years, China is poised to significantly expand its strength and capabilities. The pace of China's naval exercises and training regimen is already unprecedented, and the tempo is only likely to continue. The elimination of obsolete warships will provide China with an opportunity to improve not just the quality of its vessels, but also their quantity. If the country maintains its current rate of production, it could add approximately three destroyers each year from 2020 to 2030.

But an increase in the number of modern destroyers, frigates, corvettes and diesel-electric submarines only constitutes one aspect of the navy’s growing strength. Over the next 10 years, China will construct next-generation nuclear submarines that emit far less sound, build new types of aircraft carriers equipped with catapult launch systems and expand its amphibious fleet with the introduction of Type 075-class amphibious assault ships. Supplementing the addition of this hardware will be a continued focus on the country's logistics fleet, which is key to conducting blue-water operations — sustained, long-range maritime operations over oceans and deep waters — and securing logistics bases around the globe.

But even as China comes closer to rivaling the United States in global maritime strength, the two countries will continue to excel in different facets. Because the United States is largely secure and unchallenged in its home waters, it will retain its traditional focus on constructing a blue-water force. Accordingly, Washington has long emphasized aircraft carriers, large surface combatants and a sizable fleet replenishment force that can project influence and force around the globe. China will strive to develop these same blue-water capabilities with similar vessels, but it will focus on exercising power closer to home in the South China and East China seas. As a result, China will maintain a much larger fleet of small surface combatants and diesel-electric submarines — vessels that are ideal for combat in littoral environments close to home ports.

Other factors are also likely to consolidate China's control of its immediate vicinity, including improved command and control, better training, greater access to land-based air power and missile forces, the existence of geographic chokepoints, as well as the concentrated nature of its forces – in contrast to the more dispersed deployment of U.S. forces. By 2030, the Chinese will likely be the dominant naval force up to an initial island chain that encircles the Yellow, East China and South China seas, while it will also enjoy significant advantages out to a farther limit running roughly from Japan to Indonesia through islands such as Guam and Palau. The United States, naturally, will remain largely dominant on the rest of the world’s oceans and seas.

Predicting China's potential naval strength beyond 2030 is impossible, but the country could well seek to challenge the United States' maritime dominance even farther out in the Pacific Ocean. For the decade to come, however, the country's navy is set to go from strength to strength. It may not become the master of the open seas, but it will become the master of its own maritime backyard.

China's Navy Prepares to Close the Gap on the U.S. is republished with the permission of Stratfor Worldview, a geopolitical intelligence and advisory firm.