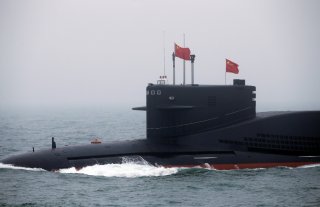 Later this month, the People’s Liberation Army (PLA) Navy will mark its seventy-third anniversary. Created to deliver China’s communists their coveted dominion rather than to harness national security, the People's Republic of China’s military structure has, since its inception, been geared towards keeping the Chinese Communist Party (CPC) in power, whatever the cost. Even its oath of allegiance is not to the country, constitution, or people, but the party. Successive Chinese leaders have thus pandered to the PLA’s political influence, affording it significant autonomy in return.

The party is deeply embedded into the military hierarchy, and its tentacles infiltrate it at all levels. Despite most military officers themselves being CPC cadres, political commissars are still present at all levels. Decisions to hold major drills, hand out promotions, or give soldiers university educations are at the party’s behest. And like in all Chinese industries, loyalty and subservience to the party are necessary to succeed materially and politically. Anyone thinking for oneself in professional military affairs is likely to be marked as a potential troublemaker worthy of disposal.

To ensure that it never discards its raison d’etre of safeguarding the party, the PLA is required to engage in constant political work. This means that 30 to 40 percent of an officer’s career is spent on non-military tasks, such as being “educated” in party propaganda, singing patriotic songs, and conducting seminars on Maoist theory. It is also common for senior officers to exert significant time and energy attempting to get elected to the national congress.

To external eyes, it seems obvious that the Chinese military’s political obsession has stunted its development. The PLA may be expanding and modernizing, but it remains rigid, hierarchical, and cumbersome.

The challenges posed by these hierarchical hang-ups are most evident in a high-tech force such as the PLA Navy, which must be agile, independent, and decisive to win. Aside from the rigidity of all arms of the PLA, its naval command and control system is especially regressive. The dual command system is highly unusual, with command and control shared equally between captains and political commissars. The Soviets, who initially spearheaded the idea, realized the flaws in the system. By 1942, the Red Army had abolished it in favor of a structure in which the commissar was a junior adviser to the ship’s captain. Meanwhile, China has backpedaled to pre-World War II levels of Stalinist hubris.

While captains and commissars theoretically share the command, operationally, the latter is first among equals, given that they have the deciding vote on all ships’ party committees. Commissars are also responsible for “reporting” on captains to the upper crust and thus hold the power to destroy or make careers. Moreover, while captains may operate independently in an emergency, a committee later judges their actions. Naturally, this means the fear of future repercussions consistently compromises PLA captains' instincts, undermining their ability to prioritize military victory. While leaks, intelligence, and exile testimony often provide incomplete insights into the PLA’s methods, it is safe to assume that Chinese president Xi Jinping’s pivot to ideological purity can only make these already stifling work environments worse.

Another element of China’s disjointed Navy is its quashing of meritocracy. Despite fashionable views of Chinese leadership tending to praise more recent efforts to liberalize, Deng Xiaoping and Jiang Zemin, like Mao Zedong, were despots who put a premium on loyalty over talent when selecting the cream of the military crop. Though hardly a shining example of progress, Hu Jintao at least somewhat bucked this trend. However, his otherwise disengaged leadership allowed corruption to blossom, meaning that the overwhelming majority of current Chinese admirals bought their way to the top. While Xi Jinping’s anti-corruption drive may have put some dents in this state of affairs, given that his new Central Military Commission is filled with loyalists, it can be expected that such nefarious circles of trust extend further down the PLA hierarchy—all at the cost of true excellence.

Traditionally a land power, China’s decades of focus on one domain have hampered the opportunity for its Navy to develop. For most of the twentieth century, the Navy was tasked with defending China's vast coast and the near seas. Only following the dawn of the millennium were operations in more distant waters expected of it. Even since this shift, the structure has been slow to match doctrine. It is surely for this reason that the Navy expanded from single-dimensional to multidimensional operations as late as the mid-2000s. Timed exercises farther from the coast and in conjunction with foreign navies also picked up during this era. Likewise, the Air Force began flying bomber sorties over water only in the 2010s.

Unrealistic training has accentuated these almost doctrinally tight limitations on deployments. Training was suboptimal until very recently, distracted by material pursuits, poor oversight, and a culture that discourages tough love. For instance, PLA pilots fly under strict ground control from commanders or instructors communicating from control towers. In 2003, an entire submarine crew perished due to procedural lapses and shoddy maintenance. While accidents do happen, shore authorities took a whole week to learn of the loss—and only after fishermen reported it. Even now, PLA submarines must be escorted by support ships when venturing beyond the near seas.

Chinese authorities are hardly world-famous for their transparency, and it is hardly surprising that China’s naval affairs are murkier than the Navy’s shiny new kit might first suggest. But what makes the situation all the more irredeemable is that the root cause of these issues persists. Furthermore, it is unlikely that churning out more gray hulls can solve the problems.