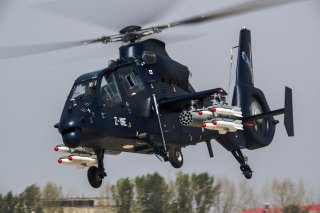 Chinese helicopters have fired a mysterious new tank-killing, air-launched missile claimed to be the most advanced the world has ever seen, according to the country’s leading weapons developers.

The missile was test-fired by secret helicopter on June 22 in Northern China’s Inner Mongolia Autonomous Region, according to a report in Global Times.

“The missile is likely to excel at range, accuracy and power, making it a nightmare for hostile tanks and fortifications,” the paper writes, citing Chinese aviation experts.

The launch was a first-of-its-kind test firing which, according to the report, “accurately hit its target.”

Interestingly, any specifics regarding range, dimensions, propulsion, guidance or explosives are not available, given the secret nature of the weapon.

This mystery means it will be tough to compare its performance to leading-edge U.S. systems in any way. Nonetheless, it would not be surprising if Beijing’s new helicopter and missile were somewhat similar to the U.S. Future Attack Reconnaissance Aircraft or Future Long-Range Assault helicopters.

The tank-killing missile itself could be somewhat similar to the U.S. Army’s emerging Joint Air Ground Missile (JAGM), or at very least an attempt to mirror its attributes or performance. The Chinese report claims the new air-to-ground missiles are “in a leading position” in the whole world and, since very little is known about it, there simply appears to be no way to know how true that claim might be.

China is well known for copying or even stealing U.S. weapon designs, however, it would take a lot of technical sophistication for their new helicopters and tank-killing missiles to rival comparable U.S. systems in any way.

Newer types of explosives (or what’s often called “energetics”) are likely involved as well. Years ago, the Army began to use new “metal sleeves” on its Hellfire missiles to increase explosive fragmentation.

This naturally increases an anti-personnel lethality effect and maximizes the weapon’s ability to destroy small groups of mobile fighters as opposed to armored vehicles. This brought great advantages during the counterinsurgency campaigns in Iraq and Afghanistan as enemy forces did not have armored vehicles but rather traveled in pickup trucks and on foot.

Ultimately, should the new missile be in any way comparable to newer U.S. weapons, it could greatly cut into or diminish U.S. tactical land war overmatch. Also, since JAGM and various new kinds of guidance systems and explosives for tank-killing weapons have already been underway for several years now, China’s recent new test does seem to align with a concerning pattern of China replicating U.S. weapons systems a few years after they emerge. This trend can be observed with stealth fighters, artillery, armored vehicles such as China’s VT5 light tank, stealthy helicopters and, as this report suggests, new air-to-ground tank-killing missiles.