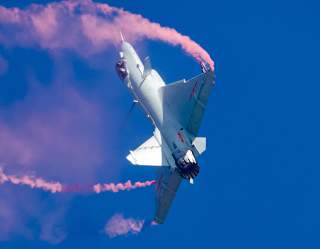 Key point: China’s air force doesn’t match the United States, because for most of recent history, it didn’t need to.

China has the third largest air force in the world and may surpass the United States within the next 15 years. But in an aerial shooting war with the U.S. Air Force, Beijing will need more than aircraft — also fighter pilots with well-honed skills capable of facing off with some of the best jocks in the world.

Right now, Chinese pilots struggle. Underdeveloped tactics and training regimens which discourage initiative — among other problems — means that, as a whole, China’s top guns are less proficient than they could be.

Now fast forward to 2030, and combine those numbers with fighter pilots schooled for more than a decade in dogfighting … the right way.