The Chinese Navy Is Holding Massive Drills as Tensions With U.S. Build 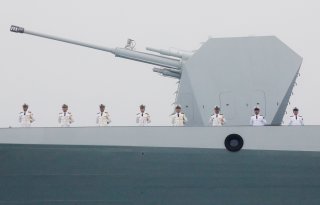 This week the Ministry of the National Defense of the People’s Republic of China announced that its ground and naval forces have been taking part in concentrated exercises including amphibious landings and maritime drills in recent weeks and will continue to so. The People’s Liberation Army (PLA) had been holding the massive landing drills as the United States Navy has increased its presence in the South China Sea region.

Ground troops attached to the PLA 74th Group Army, which is based in South China’s Guangdong Province, took part in a beach assault in a mock confrontation between offensive and defensive positions. This included saturated artillery fire from multiple launcher systems while the landing troops successfully “seized” the beaches.

“The PLA drills are a show of capability and determination, and the United States should be warned and should not make dangerous moves to avoid misjudgments that neither side would like to see,” the Ministry of the National Defense said in a statement as reported by the Defence-Blog.

Yet, despite warning that the United States should not make any “dangerous moves,” the state-sponsored Global Times newspaper cited Xu Guangyu, a senior advisor to the China Arms Control and Disarmament Association as stating, “If the U.S. goes further, the PLA could take more countermeasures, including live-fire missile drills east of Taiwan Island and near Guam.”

The paper had previously reported that the PLA would conduct a series of maritime live-fire training exercises in the waters of the Zhoushan Islands and East China’s Zhejiang Province in the Huang Dayang sea area from August 11–13, and in northern waters of the Daishan waterway from August 16–17. During those periods no vessel would be allowed to navigate within the areas and all vessels would have to follow the guidance of the guarding ships on site.

All this comes as China’s first Type 075 amphibious assault ship reportedly has embarked on its maiden voyage from Shanghai. The warship combines the functions of a helicopter carrier and transport dock, which enables it to deploy landing craft, hovercraft and helicopters while also transporting hundreds of soldiers or marines. Earlier this year, China launched its second Type 075 class assault carrier, and it can reportedly house as many as thirty attack helicopters.

In addition, earlier this month aircraft from the People’s Liberation Army Air Force (PLAAF), including the latest H-6J bomber, have been conducting regular sorties over the waters of the South China Sea. The H-6J is an upgraded variant of the decades-old H-6, a large bomber platform which first flew as far back as 1959. Its size and longevity, interestingly, appear to parallel the Vietnam-era historic B-52.

Experts have warned that even a small “clash” or other incidents in the South China Sea could lead to a dangerous “all-out war”—making the region one of the most volatile in the world. China’s latest saber-rattling certainly won’t help or likely even deescalate matters.