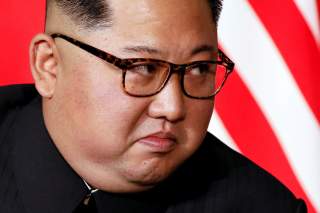 Chinese trade with North Korea for the first six months of 2018 is down significantly over the same period in 2017, Beijing reported.

Chinese imports from the North dropped 88.7 percent to just $103 million, while Chinese exports to its nuclear neighbor decreased by 43.1 percent to $960 million, Huang Songping, spokesman for China’s General Administration of Customs, revealed Friday, according to The Associated Press. He explained that exports and imports have been in decline for the better part of a year.

Chinese imports were down 92.6 percent in June, with exports of oil and other goods reduced by 40.6 percent.

Data from the Chinese government is known to be, to a certain extent, unreliable, and there are concerns in the U.S. that China may be relaxing sanctions on North Korea as a fragile peace settles over the Korean Peninsula. Huang insisted that Beijing has “consistently implemented” all United Nations sanctions resolutions passed to punish North Korea for its malign activities.

North Korean leader Kim Jong Un met Chinese President Xi Jinping for the first time in late March. The two met again in May and again just one week after Kim’s summit with Trump in Singapore. The North Korean leader is said to have requested during their most recent meeting that his Chinese counterpart “work toward early lifting of the sanctions.”

Xi reportedly said that China would make the “utmost effort” to do so.

Secretary of State Mike Pompeo acknowledged in late June at a Senate Appropriations subcommittee hearing that the U.S. has seen “a modest amount” of backsliding on sanctions enforcement from China, a serious problem considering that North Korea has yet to take any concrete and verifiable steps toward the stated goal of denuclearization.

Shortly after the summit, China’s foreign ministry proposed a relaxation of sanctions.

“The U.N. Security Council resolutions that have been passed say that if North Korea respects and acts in accordance with the resolutions, then sanction measures can be adjusted, including to pause or remove the relevant sanctions,” Ministry of Foreign Affairs spokesman Geng Shuang said during a regular press conference on June 12, adding, “China has consistently held that sanctions are not the goal in themselves. The Security Councils actions should support and conform to the efforts of current diplomatic talks towards denuclearising the Korean Peninsula, and promote a political solution for the peninsula.”

Trump expressed concern in the weeks following the Singapore summit that the China-North Korean border is “getting a little weaker now,” a reference to increased bilateral trade, possibly in violation of sanctions. “We have to get him to keep it tough,” the president said, referring to the Chinese president.