Chinese Troops Head to Russia Ahead of Moscow’s Army Games 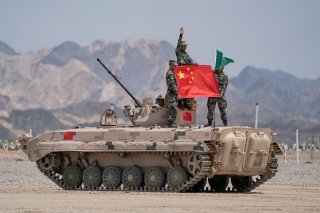 China is sending troops and heavy armor to Russia ahead of Moscow’s International Army Games, which will be held next month.

The upcoming event will mark the first International Army Games since Russia invaded Ukraine in February. “Currently, 275 teams from 37 countries have confirmed their participation in the Army Games. Teams from Niger and Rwanda will take part in the games for the first time," Russia’s Defense Ministry said in a statement.

Moscow has not confirmed a full list of competitors for the 2022 edition of the Army Games, which is styled by Russia as a kind of “War Olympics.” Participants in previous installments of the annual event, first held in 2015, were drawn largely from the former Soviet Union, Asia, and Africa. Though several NATO countries have previously joined the event as observers, only one—Greece—has participated in the games.

The International Army Games involve dozens of events, notably including the Tank Biathlon, the “Suvorov Onslaught” infantry fighting vehicle competition, the Aviadarts air crew competition, and an amphibious assault competition for marine units. Many of the Army Games were previously hosted by Russian military allies and partners, including China, Belarus, Iran, Serbia, and Uzbekistan. In addition to twelve events being hosted in Russia, the 2022 rendition of the Army Games will be split across the territory of twelve nations. China, Kazakhstan, Armenia, and Uzbekistan are counted among this year’s host countries.

China’s participation in the Army Games, which will be held from August 13 to 27, is the latest indication that Beijing is standing fast in its continued support for Moscow five months into its invasion of Ukraine. “As the culprit and leading instigator of the Ukraine crisis, the U.S. has led NATO to engage in five rounds of eastward expansion in the last two decades after 1999,” Chinese Foreign Ministry spokesperson Zhao Lijian said in April. “The number of NATO members increased from 16 to 30, and they have moved eastward more than 1,000 kilometers (600 miles) to somewhere near the Russian border, pushing Russia to the wall step by step,” Zhao added.

The 2022 Army Games come as the Kremlin tries to demonstrate to the international community that the Western campaign to isolate it diplomatically and economically has failed.