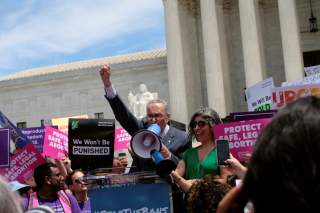 “Democrats are trying to cloak their anger at President Trump in rhetoric about protecting norms and institutions,” Schumer said. “But in reality, it is their own side of the aisle where anti-institutionalism is rampant.”

“We talk about attacks on the official of the presidency,” he said. “On the electoral college, on the First Amendment, on the Senate itself. But most striking of all havebeen the shameless efforts to bully our nation’s independent judiciary, and yesterday those efforts took a dangerous and disturbing turn.”

McConnell noted that this attack “was not some isolated incident.”

“The left-wing campaign against the federal judiciary did not begin yesterday, not yesterday,” he said, reminding his colleagues that during the impeachment trial of Supreme Court Justice Brett Kavanaugh, Warren and others attacked Chief Justice Roberts for “staying neutral instead of delivering the outcomes that they wanted.”

“These same groups came to senator Schumer’s defense yesterday with attacks against the Chief Justice for condemning the threats against his colleagues,” McConnell added. “And last summer, a number of Senate Democrats sent a brief to the Supreme Court threatening to inflict institutional change on the Court if it did not rule theway the Democrats wanted.”

“In other words, give us the ruling we want, or we’ll change the numbers of the court,” McConnell explained.