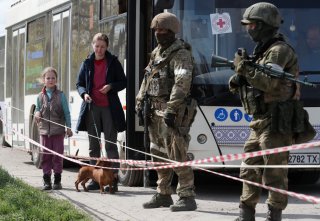 Some civilians are being evacuated from the besieged Azovstal plant in the southeastern port hub of Mariupol after weeks of standoff.

"As a result of the operation performed on the initiative of President of the Russian Federation V. V. Putin to liberate civilians held in Mariupol at the Azovstal plant by Ukrainian nationalists, 25 persons left nearby houses on the first day, April 30, and 21 individuals more from the plant territory,” read a statement issued by Russia’s Defense Ministry, as per state-run news outlet TASS. “All 46 individuals voluntarily decided to remain in the Donetsk People’s Republic. On the second day of the operation on May 1, 80 more civilians held by Ukrainian nationalists were freed from the plant territory, with lodging for the night and meals provided to them and the required medical aid offered," the statement continued.

The evacuations came shortly on the heels of a meeting in Moscow between Russian president Vladimir Putin and UN secretary-general Antonio Guterres. Putin said he agreed “in principle” to UN involvement in the evacuation of civilians from the sprawling Azovstal metallurgical plant to the city’s south.

Of the 120 individuals that were freed, Russian officials said just under half decided to stay in the pro-Russian breakaway Donetsk People’s Republic (DPR). Sixty-nine more allegedly opted to cross into territory controlled by the Ukrainian government.

Denys Shleha, commander of the 12th Operational Brigade of the Ukrainian National Guard, told CNN from inside Azovstal that around 200 civilians are left after the latest wave of evacuations.

At least some of the evacuees are taken to Russian “filtration” camps, with one such site located in the town of Bezymennoe. Russian experts say these camps are intended to verify the identities of evacuees and refugees, preventing combatants from passing themselves off as civilians to avoid becoming prisoners of war. Critics have likened the sites to “concentration camps,” alleging the widespread use of torture and other forms of inhumane treatment.

Azovstal’s defenders have appealed to the west to initiate an “extraction” procedure by which the Ukrainian troops would be transferred to the territory of a “third-party state,” such as Turkey. The Kremlin has expressed a willingness to facilitate the evacuation of civilians from the plant, but it continues to insist that all combatants inside Azovstal must surrender to the Russian forces that have encircled the facility.

The Azovstal plant is the last site of Ukrainian resistance in Mariupol, with the rest of the city coming under occupation by Russian and DPR forces. U.S. defense officials have assessed that the fall of Azovstal, which is under blockade and subject to near-constant shelling, would free up twelve Russian battalion tactical groups—up to 12,000 troops—to participate in ground offensives elsewhere in the eastern Donbas region.