Clarence Thomas is the Answer to the 1619 Project 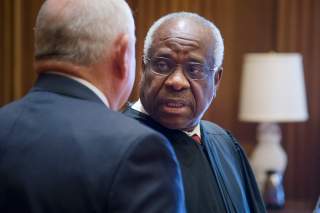 Justice Clarence Thomas is famously quiet on the Supreme Court. But a new movie, “Created Equal: Clarence Thomas in His Own Words,” is drawn from an exclusive interview with Thomas. Filmmaker Michael Pack shares what he learned about Thomas.

Jarrett Stepman: We are now speaking to filmmaker Michael Pack. Pack is the director of the soon-to-be-released documentary “Created Equal: Clarence Thomas in His Own Words.” The movie is set to come out on Jan. 31. Michael, thanks so much for joining us on The Daily Signal.

Michael Pack: Thank you for having me.

Pack: It does, I mean, exactly. Most Americans don’t know about it. And really the purpose of the film is to tell his whole story and to dispel the myths and fabrications that have grown up over the years.

The format of the film is called “Created Equal: Clarence Thomas in His Own Words” because it’s mainly Justice Thomas speaking directly to camera and telling his story from birth all the way up to today.

It’s based on a three-hour interview that I conducted with Justice Thomas and Ginni, his wife. And only them. There are no other interviews.

He tells his story as he sees it from the very beginning, right to camera. There are recreations, there’s archival footage, there are stills, but there’s no other interview. You hear the story from Justice Thomas because it’s a great story, and in talking to people, he was overwhelmingly the best to tell it. He’s a great storyteller with a wonderful voice.

Stepman: Yeah. That really will be something, especially as Thomas is notably quiet on the Supreme Court. Getting to actually hear this from Thomas himself seems to be one of the most interesting aspects of this documentary.

One thing that really struck me, certainly about Thomas’ life, is his kind of political transformation. Obviously, [he] had rich experiences growing up. [He] grew up in, at the time, [the] still-segregated state of Georgia. Obviously, some harrowing times there.

But he really had a political transformation. He really was, as a young man, a man of the left, I think [he] even supported the Black Panthers and ended up as an appointee of the Reagan administration, obviously, an appointee to the Supreme Court of Republican President George H.W. Bush.

Can you kind of explain that transformation? Because it seems kind of wild on its face.

Pack: Well, that’s right. That’s one of the reasons it’s a great story, because it’s … not only a Horatio Alger story of going from dire poverty and segregation, as you said, to the highest court of land, but of these political, emotional, spiritual changes. And he’s very articulate about it.

As you say, he was born in the South, he was born in Pin Point just outside of Savannah, Gullah Geechee area. So he grew up speaking a dialectic, a Geechee dialect, not even English. They were dirt poor. His mother worked in a crab factory. But they had a lot to eat. It was relatively idyllic.

And then she moved to Savannah where she worked as a maid and took care of Justice Thomas and his brother. But she just couldn’t make ends meet. He was hungry. He was cold in the winter. She’d take him to school, he’d wander the streets. It was really dire poverty of a kind few experience and in the midst of the segregated south.

So then, [when] he was about 8, she brought him to her father, his grandfather, to raise because she realized she couldn’t take care of him. And that is what turned Justice Thomas’ life around. His grandfather who was poor and nearly illiterate, but he had a small home heating oil business.

He gave Thomas and his brother a decent home, discipline, hard work, values. He had converted to Roman Catholicism. He sent them to parochial school, also a segregated school, but run by Irish nuns who gave him more discipline, a great education. And that really turned his life around from the sort of drifting in poverty to this new path.

And he was so successful. He wanted to study to be a priest and he entered seminary and he would’ve been one of the first African American priests in Savannah. But as you implied, or as you said, he became disenchanted with all that.

It was the late ’60s, … he was watching Martin Luther King [Jr.] being shot on TV in ’68 and one of the seminarians said, “I hope that son of a b—- dies,” and that was just too much for Justice Thomas. It was just too much racism there. The church was doing too little about civil rights, and then he flipped and felt, “No, this is all wrong.”

And he lost his vocation. He said he wanted to leave the seminary.

When he told his grandfather, his grandfather kicked him out, the only home he had ever known and he was adrift and he became an angry black man. He saw race and racism explained everything. His grandfather was a sucker, but he was on his own, he had to go wherever he could.

He happened to have a full scholarship at Holy Cross College in Worcester, Massachusetts, a Catholic school. He went up there and there he partook, as you said, in the black radicalism of the ’60s. He helped form the Black Student Union. He engaged in walkouts. As you said, he invited a Black Panther to come speak on the campus. And as Thomas said, they were supporters of everybody who was in your face, Angela Davis, Huey Newton, whomever.

And then a large part of the film is Justice Thomas’ turning away from that, recapturing his faith, coming back to Catholicism, his discovery that all the programs on the left were not working, especially busing in nearby Boston and affirmative action and a lot of the ideas and anti-Americanism of the black radicalism no longer appealed to him.

He sort of started to see through it and drifted to the right until, as you say, he finally went to work for the Reagan administration in the ’80s, and worked first in the Civil Rights Division of the Department of Education, and then the EOC. And then finally he was nominated by George H.W. Bush for the Supreme Court and had that extremely contentious confirmation battle.

But from the time he went to work for Reagan and was a public figure, he was battling people who didn’t agree with him. Civil rights leaders, people on the left, people who said, as he says in the documentary, that he was the wrong kind of black man.

So it culminated in the hearing and that’s a very dramatic story and he tells it in a very moving way. And then he talks about the jurisprudence on the Supreme Court.

So you’re right, it’s a very complex story. It’s hard to understand if you don’t hear it directly from Justice Thomas, which viewers will be able to do.

Stepman: Of course. What made you tell this story of Clarence Thomas now? Does this have anything to do with the recent confirmation battles over Brett Kavanaugh? Did it have to do with some of his tussles with Joe Biden? Why now? Why come forward with the story at this point?

Pack: Well, documentaries take a long time. We’ve been working on it for almost three years, but I have to say, it’s become more relevant.

The Kavanaugh hearing happened in the middle of our production period. The #MeToo movement happened. But I think all that makes it very important to hear a Thomas’ story.

The #MeToo movement likes to say that Anita Hill is its Rosa Parks, founding mother of the movement. But it’s good to look at the real story. I think your podcast is very focused on correcting the myths of history, and that’s a myth.

And the same thing with the Brett Kavanaugh hearing. It was, in a lot of ways, a replay of the Thomas hearing. A lot of people noticed that on both sides. So it’s worth thinking about what it was that was replayed.

I think it’s very current for the time. But I actually think it’s current beyond the time. I think Justice Thomas’ story is a great story, a great American story, and will be 20 or 30 years from now as well as now.

Although I think it’s ripe for the moment, it’s beyond that. I think it’s an inspiring story of overcoming great obstacles, of resilience in the face of many, many challenges. And of somebody who could easily have defined himself as a victim and chose not to.