Clever: The Air Force Will Use Old F-35s to Simulate Russian and Chinese Stealth Fighters in Mock Battles 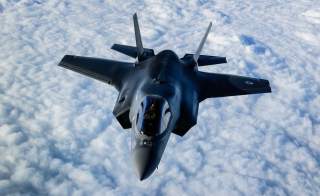 Key point: Washington is aware that Beijing and Moscow have their own sophisticated stealth fighters. In order to prepare to fight them, the Pentagon will use early versions of the F-35 to simulate enemy aircraft.

The U.S. Air Force plans to re-establish a defunct squadron that as recently as 2014 flew F-15s to simulate the enemy force in realistic war games.

The stealth aggressor squadron will fly from Nellis Air Force Base in Nevada, where the Air Force hosts its annual Red Flag exercise. It’s unclear when the unit will restart operations. The 65th Aggressor Squadron five years shut down as a cost-saving measure.

The War Zone reporter Tyler Rogoway on May 9, 2019 broke the news of the unit’s revival. “Nellis Air Force Base looks forward to reactivating the 65th Aggressor Squadron with the F-35A,” Rogoway quoted Nellis spokesperson Maj. Chris Sukach as saying. “This added capability will enhance the already robust adversary replication provided to U.S. and partner-nation air forces through multiple training and exercise scenarios.”

“The F-35's ability to play the bad guy will surpass that of any aircraft ever tasked with the mission before,” Rogoway wrote.

“These guys are getting really good at flying the F-35 and they can present some aggressive situations that force young pilots into errors,” said Maj. Benjamin Walters, an F-16 instructor pilot. “It’s not always the guy who should win that does win. At some point it's pilots in cockpits that win fights.”

With the 65th Aggressor Squadron playing bad guy year-round, more Air Force pilots soon could have the chance to tangle with an experienced fellow U.S. pilot flying a stealth fighter. That could help them prepare to battle Russia and China’s own stealthy warplanes.