On Climate Change, Africa Is Where the Rubber Hits the Road 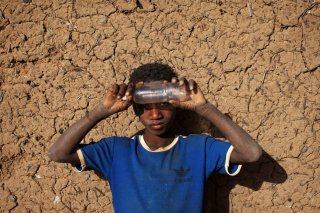 It only stands to reason that the rising generation on the continent most vulnerable to climate change is the most prepared to do something about it.

While global leaders make and reiterate pledges as they did at the COP26 “Climate Summit” in Glasgow late last year, it is worth remembering that there currently exists no enforcement mechanism to hold them to their words. Young Africans, on the other hand, don’t need to have their feet held to the fire on the question of implementing climate commitment because they already feel the heat.

2019 was the hottest year on record for Africa. The urgency for action is part of our daily reality here. In 2020, climate change-based disasters cost the world economies more than $210 billion. But a look forward is grimmer still. The UNEP Africa Adaptation Gap Report 2015 tells us that the cost of adapting to climate change across Africa alone could reach $50 billion per year by 2050 if implementing commitments are not met.

In total, Africa only contributes three percent of the emissions that create climate change, but a variety of factors make the subcontinent the world’s most susceptible to its effects. At the top of this list is poverty. The poor are disproportionately vulnerable to it because they lack the resources to afford goods, services, and alternatives needed to buffer themselves against the worst of the changing climate’s impact.

If global efforts to curtail emissions fall short, 86 million Africans are likely to become “climate migrants” in the next quarter-century. The impact on richer countries of such a massive dislocation of people is difficult to imagine, but it would surely be felt far beyond Africa’s shores.

That is why many African states are already stepping up to the task of reducing emissions. 98 percent of African countries have ratified the National Determined Contributions (NDCs) and some are taking concrete steps to meet these. Kenya, for instance, has eliminated its Value Added Tax (VAT) on three classes of clean cooking solutions—biogas and biogas equipment, sustainable fuel briquettes, and ethanol. This incentivizes citizens and companies to cut emissions every day through their choice of cooking energy options.

Indeed, there is a market opportunity for combating climate change in Africa. Young Africans are poised to capitalize on this, our research shows.

The Ichikowitz Foundation recently launched a special “Climate Edition” of our annually conducted African Youth Survey, gauging the opinions, attitudes, and ambitions of over 4,500 young Africans from across fifteen Sub-Saharan countries.

Nearly eight in ten (78 percent) respondents expressed worry about increasing levels of pollution in Africa, and nearly three in four (74 percent) are concerned that climate change is destroying natural habitats critical for their surrounding wildlife, for farming, tourism, and their very subsistence.

Impatience with government inaction is also growing. 85 percent of African youth polled believe that their governments need to be more proactive in addressing the threats of climate change, and 80 percent think their governments should be working harder to adopt green energy solutions to reduce carbon emission.

Encouragingly, nearly two-thirds (64 percent) of young Africans surveyed say they are taking action to reduce their own carbon footprints. When you consider the fact that Africa is home to the world’s fast-growing and most youthful population, it suggests a surging will for change.

For young Africans, addressing head-on the drivers of climate change is not an option or luxury, but a matter of safeguarding their destinies.

Values and social impact-oriented investors can find real opportunity for partnering with a new generation of “green revolution” friendly Africans, motivated to find win-win solutions to building their economies while delivering on their commitments. Here we call this “eco-capitalism,” which is Africa’s path forward.

Some countries are already collaborating and partnering with Africa to drive climate action. But the real kicker will be in the region’s performance when it comes to prioritizing this vision, which pairs opportunity and obligation—an entrepreneurial and “can-do” oriented talent pool with young Africans’ strong desire to reduce emissions and save their homelands.

Africa may well be the world’s proving ground when it comes to turning the words of Climate Summits like COP and even of the Paris Agreement into measurable actions. If the attitudes of the subcontinent’s youth are any indication, it is better not to sell us short.

Ivor Ichikowitz is a South African industrialist and philanthropist, named one of New African Magazine’s 100 Most Influential Africans of 2020. Dr. Richard Munang is a climate change and development policy expert and author of Making Africa Work Through the Power of Innovative Volunteerism. The views here are expressly their own.