Climate Change Fallout: Beer and Wine to Get More Expensive 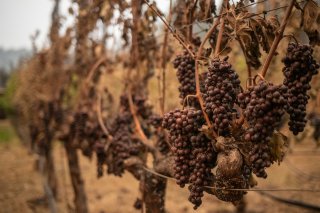 Large-scale climate change disasters grab the most headlines, but climate change is now becoming more responsible for the fast-rising prices of beer, wine, and other alcohol products.

“All of these products depend on somebody making a bet on a crop,” Dr. Andrew Pershing, a climate scientist with the nonprofit news organization Climate Central, told the Austin, Texas, news outlet KXAN. “That bet is getting harder to make as climate change is scrambling the odds.”

The news station added that “shifting rainfall patterns and hotter temperatures are changing growing zones for certain crops. Added variability in our climate is leading to longer periods without rainfall, intensifying droughts, and also more intense rainfall when it does come, which worsens floods.”

Pershing also said that wine grapes tend to have narrow temperature ranges in which they are comfortable. Smoke from annual wildfire seasons can make other grapes unusable.

Modeling efforts by Climate Central and Columbia University also showed that climate change will have a sizable impact on crop production across the state of Texas.

“Projections are that corn productivity in Texas could decline by 25 percent by the middle or end of this century, translating to a loss of about $360 million per year to the Texas economy,” according to KXAN. “Future temperature rise and agricultural impacts will vary depending on the course of manmade greenhouse gas emissions.”

A separate report from the medical journal the Lancet is also warning that climate change will trigger massive food shortages, deadly disasters, and disease outbreaks that could potentially eclipse the death toll of the ongoing coronavirus pandemic.

Greenhouse gas emissions, which are “driven to a large extent by the burning of fossil fuels (e.g., coal, oil, and natural gas), have already warmed the world by 2 degrees Fahrenheit on average, compared to pre-industrial temperatures,” says the Lancet Countdown on Health and Climate Change.

“There is no safe global temperature rise from a health perspective, and additional warming will affect every U.S. region. Today’s adverse health impacts of climate change are varied and widespread,” it adds.

The economic costs associated with climate change have been shown to be devastating.

“In 2020, a record-breaking twenty-two weather and climate disasters each caused over $1 billion in damage (e.g., structural, crop) in the U.S. with over $95 billion dollars in total losses. A record eleven hurricanes made landfall—seven as billion-dollar events,” it continues.