Climate Change Has Become One of the Navy’s Biggest Challenges 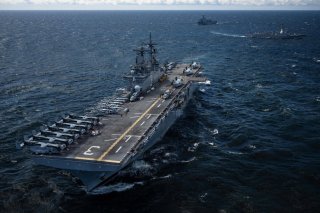 The U.S. Navy is becoming more acutely aware of the detrimental impact climate change could have on military preparedness. As a result, they are holding wargames to play out what effect a changing climate could have on the fleet.

The Navy’s assistant secretary for energy, installations and environment, Meredith Berger, explained to reporters that the goal of the wargame would be “to come together and really think about and experience what it means to operate in a climate-impacted environment,” USNI News reports. “We’re going to create the right level of stress in a very responsible way to see that it is hard to make these choices and there [are] unanticipated consequences and there’re costs and impacts and all sorts of intervening circumstances that we need to think about from each other’s perspectives,” she explained.

The Marine Corps came to a similar conclusion in a 2015 document evaluating how a changing climate would affect the Corps’ operational environment. “By 2030, poorer nations and poorer populations are most adversely affected and least able to cope with the worst effects of climate change. Migrations increase in frequency and scale as the poor move toward the urban littorals,” the Marine Corps document reads.

To better respond to a changing environment, the Navy may begin using different platforms. “That’s a place where the [Navy acquisitions] portfolio will be focused on that and it’s a place where we have a partnership so I can take what we’re talking about as a department from a climate perspective, from [a] chief sustainability officer perspective, and make sure that there are some … opportunities to drive that focus, make sure that we are meeting or exceeding those objectives, and signaling to the market that this is a direction that we are going,” Berger said.

“The department is a big market driver and this is an opportunity to signal what our requirements are so that we are meeting those climate objectives,” she continued. “As we work together to execute, that is the opportunity to make sure that we’re meeting objectives like … research, development and acquisition, making sure that we’re putting in those requirements and signaling what it means,” she explained.

“It’s also a lot of things that traditionally fall under the climate portfolio, as I’ll call it, so making sure that we have resilient-built infrastructure both in the cyber defense and in the climate defense realms, and making sure that we have a department-wide approach to what it means to incorporate that resilience, that sustainability, in everything that we are doing.”

Building Naval climate resiliency may depend largely on how widely the sailing service can make the change to electrical power and phase out fossil fuel usage in favor of climate-neutral energy. This will have to take place both on warships and in dockyards.