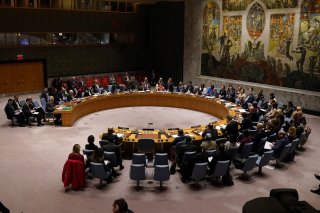 Global temperature rise is likely to cause enhanced extreme weather events which could lead to social and political instability in vulnerable regions of the world. The security questions related to climate change, however, have emerged as a polarizing theme in global politics. The rejection of the first-ever draft resolution on climate security put to a vote at the United Nations Security Council (UNSC) this past week reflects this deep divide. A group of sovereignty-conscious major and middle powers, including Russia, raised some valid objections at the UNSC tied to the risks of lack of representation and potential enabling of coercive interventions. The only way forward is for the United States and its European partners to step back from the rush to both universalize and securitize climate change and focus instead on piecemeal steps that can gain the support of opponents.

It was Russia’s veto that killed last week’s UNSC resolution, which had support from twelve of the Council’s fifteen member states. Russia was backed by India, which also cast a “no” vote, and China, which criticized the draft, but chose to abstain.

Explaining its veto, Russia pointed to the lack of consensus among UN member states on the issue. It said conflict was a complex and poorly understood issue, there was no “automatic link” between climate and security, and the UNSC was not the right forum to discuss climate-related questions.

India’s arguments mostly aligned with Russia’s. New Delhi reiterated its long-standing position that climate change was a developmental rather than a security issue. It asserted that the United Nations Framework Convention on Climate Change (UNFCCC), under whose auspices the annual climate Conference of Parties (COP) negotiations are held, was the proper body to take up the issue. China acknowledged the “potential” of a climate link to conflict, but said that climate change should not be securitized and developed countries should shoulder their historical responsibility on emissions.

It would be tempting to dismiss the resolution’s opponents simply as spoilers to an otherwise gelling consensus on climate security. But this would be a mistake. As many as eighty UN member states are also opposed to or at least skeptical of a the UNSC’s role here. It is true that academic research on the causal link between climate and interstate or intrastate violence has yielded mixed results. The causality is much clearer, however, when it comes to the adverse effects of climate change on human security (i.e., economic marginalization, health, and displacement). Intuitively, these can be seen as eventually leading to violence, or at the minimum, deepening the fault lines within and between states.

More to the point, current academic research has examined cases in what is currently a world of relatively modest warming of 1.1 degrees Celsius. As we move toward a likely 2 degrees C world in the next two decades, climate change will become a first-order phenomenon in the international system with natural disasters and extreme heat making some of the world’s most densely populated regions practically uninhabitable. In such a world, the likely link between climate change, instability, and conflict will be much stronger.

Therefore, taking up the topic of climate security as a matter of international concern cannot be avoided for long. But the securitization of climate change is a double-edged sword. On one hand, it raises the level of urgency, concentrates minds, and potentially makes more resources available. On the other, it can create “states of exception” in which processes of ensuring buy-in and building up favorable opinion are short-circuited in favor of opaque decision-making by a select set of powerful states. The fact that the five permanent members of the UNSC are currently divided does not preclude them coming together in the future in ways that short-change the rest of the world.

The core challenge here is to ready the international community for action that does not mirror past precedents of hegemonic behavior or create new divisions, all while safeguarding the planet as well as vital interests of all states.

The most dubious such precedent is the “Responsibility to Protect” (R2P), an idea that emerged in the 1990s in North America and Europe, legitimizing coercive intervention in states in order to ostensibly protect civilians from mass persecution or state repression. The evolution of an R2P-like doctrine on climate change is not a far-fetched possibility. When Cyclone Nargis hit Myanmar in 2008, France, backed by the United States, proposed coercive intervention in the country supposedly to help Myanmar’s victims who were being ill-served by national relief missions.

R2P or related humanitarian arguments were also deployed during the U.S.-led invasions of Libya in 2011 and Iraq in 2003. Both wars came at a huge cost and left even more instability and destruction in their wake than the crises that triggered them. Any discussion of climate security in the United Nations ought to steer well away from the temptations of a new R2P-type doctrine or other coercive frameworks.

Security also ought to be defined narrowly—if everything is considered to be security, then nothing is. Critics are rightly concerned that “climate security” could be used as a means to dictate developmental choices and priorities. Mitigation actions should therefore be explicitly excluded from climate security discussions.

Though the UNSC is tasked by the UN system for the maintenance of international peace and security, it may not be the right forum to take up climate security at this time. The UN General Assembly (UNGA) lacks the coercive powers of the UNSC but is fully representative of all member states and has its own history of taking up climate security. A UNGA role in actions that directly prevent major loss of life—encouraging transnational early-warning systems for natural disasters, backing enhanced adaptation in conflict zones, and even facilitating proactive diplomacy in situations of future climate-magnified tensions, would have more currency.

Adopting a case-based approach could also be beneficial. This would avoid the one-size-fits-all universalization of climate security. For example, Russia, China, and India introduced an alternative draft specifically focused on aid for climate and conflict-wracked Sahel region, but the United States and its partners were not interested. Such an approach could act as a learning tool, even as further research clarifies the attribution of climate and security. Eventually, an accretion of such cases may or may not forge a narrower consensus that is more generic in its scope. Care should be exercised in case selection. Africa has been a disproportionate focus of climate security attention, as also of activities in the International Criminal Court, which opens such patterns up to charges of racism.

For their part, Russia, India, and other opposing states will need to be more open to accepting linkages between climate change and conflict. They also need to acknowledge that current divides are not so much North-South in nature as between a set of sovereignty-conscious major and middle powers and the rest.

Although Russia and others were consulted over the UNSC draft, the consultation did not ultimately succeed. In the future, the goal ought to be evolving a common understanding through compromise. This will inevitably take time. Divisive blocs, of the sort that we saw at the UNSC last week, will worsen rather than help solve the challenges of a natural disaster-wracked world that is our likely future.

Sarang Shidore is the Director of Studies at the Quincy Institute for Responsible Statecraft and a Senior Research Analyst at the Lyndon B. Johnson School of Public Affairs at the University of Texas at Austin.