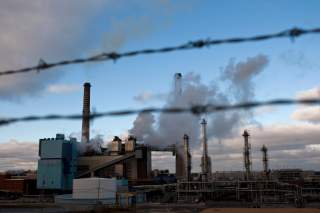 An environmental attorney with a history of crusading against oil companies is kickstarting a campaign targeting major chemical companies, according to a watchdog group.

One of the attorneys who is targeting oil companies over climate change is doing the same against chemical manufacturers as activists start another crusade, according to memos a watchdog group obtained.

Pawa told Connecticut Assistant Attorney General Matthew Levine in an Aug. 22 email that he filed a similar lawsuit targeting major chemical companies on behalf of Vermont’s attorney general’s office. Vermont, for its part, reportedly sued in 2018 to conceal aspects of a 2016 fundraiser that was reportedly orchestrated to discuss how states might engage in climate lawsuits, according to the Competitive Enterprise Institute.

“We would, of course, be honored to represent Connecticut in PFAS litigation and stand ready to help if AG [Attorney General William] Tong decides to proceed with outside counsel,” Pawa wrote, according to the memo. He was referring to a group of chemicals called per- and polyfluoroalkyl substances (PFAS) that are used to produce many household items.

Pawa declined to comment for this story and directed the DCNF to an unrelated link when asked about his role in recruiting Connecticut’s attorney general’s office.

The Environmental Protection Agency announced a proposal in November requiring plants to track and report how much of the chemical they release. The agency will also announce guidance for how to clean up the chemicals as well as update what amount of PFAS is considered safe in the country’s drinking water.

Researchers are conflicted about the long-term side effects resulting from prolonged exposure to PFAS. There is no evidence showing perfluorooctane sulfonate (PFOS) or PFAS, which belong to the same family of chemicals, exposure causes cancer in humans, according to a study by Ellen Chang, an epidemiologist and scientist at California-based consulting firm Exponent.

PFAS are called forever chemicals because they do not biodegrade and are fixtures in modern American society.

Still, states are coming out in full force against companies that use the substance.

State law enforcers in Ohio, New Hampshire, New Jersey and Michigan, for instance, deputized law firms to pursue litigation targeting companies like DuPont and 3M, among other massive chemical producers. Such lawsuits are often bonanzas for attorneys as they are based on an arrangement that requires attorneys to be paid out of a plaintiffs’ winnings.

DuPont and Chemours coughed up $671 million in 2017 to settle more than 3,500 lawsuits related to PFAS waste. Neither company admitted fault.

How Are Regulators Reacting To Supposed PFAS Contamination?

Legal analysts said politicians and regulators are reacting to fear-mongering.

“They react to fear in the community and sometimes those concerns can be very legitimate — what happened in Flint [Michigan] never should have happened there,” Alston & Bird attorney Jeffrey Dintzer, who works on environmental tort cases, told reporters in June. There’s been a lot of fear-mongering on the topic, he noted.

Dintzer added: “A lot of times there’s a tremendous amount of hysteria stoked by plaintiffs firms, and it’s unnecessary and it causes a substantial amount of anxiety among the population.” Pawa, who reportedly counseled attorneys general on how to pursue cases against big oil, is not the only environmental attorney who is involved in targeting DuPont and others.

Law Firms Are Fighting Over Who Sues What Industry

Pawa and Vic Sher, who was with Sher Edling at the time, have a long history together. They got into a multi-million-dollar legal dispute in 2014 stemming from a lawsuit they worked on against ExxonMobil. Sher, who was with Sher Leff at the time, said Pawa’s group, Pawa Law Group, failed to distribute money from a settlement in the case. Pawa, in turn, argued in a lawsuit that Sher was the one cheating him out of millions of dollars, court documents show.

Sher Edling and Pawa’s group — Hagens Berman — barnstormed the country in recent years, convincing cities to sue energy companies for allegedly contributing to damage caused by climate change. The rivalry between the two attorneys heated up Nov. 26 after San Francisco and Oakland, California, fired Hagens Berman and hired Sher Edling to represent the cities as they appeal a court’s decision to dismiss their lawsuits against Exxon.

Hagens Berman’s fee would have been 23.5% of any winnings from its cases with San Francisco and Oakland. Hagens Berman stood to earn possibly billions of dollars in contingency fees depending on the total winnings, had San Francisco, Oakland or New York City won their global warming suits.

Hollywood Is Apparently Taking Part In The Crusade

Skoll founded the Skoll Foundation and owns Participant Media, a film production company that produced “Dark Waters” starring actor Mark Ruffalo, which tells the story of an Ohio-based attorney who fought legal battles against a massive chemical company. “Dark Waters” was released in 2019.

Ruffalo testified in front of Congress in November about what he and other activists believe are the dangers PFAS pose. Todd Haynes, the director of “Dark Waters,” painted a dire portrait of what such chemicals are capable of doing to people.

“I can see how the illnesses, the rotting teeth, and the dead livestock all fit into that. It’s a terrifying peril,” Haynes said in a November interview. A study BMJ Open published in 2018 found no linkage between PFAS or any other so-called “forever chemicals,” and the prevalence dental cavities.

Tong’s office has not responded to the DCNF’s request for comment.