Close Call: How a T-38 Trainer Prevented an SR-71 Blackbird from Having Its Nose Section Fall Off! 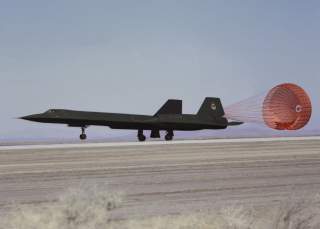 The nose section allowed the SR-71 to have radar-imaging capability with the advanced synthetic aperture radar system (ASARS), photographic imagery with the optical bar camera (OBC), or a ballast installed.

The first order of business before starting SR-71 training was to get checked out in the T-38 Talon aircraft, used as a companion trainer for SR-71 crew members. Another role for the T-38 was to fly “pace chase” formation with the SR-71. Whenever the SR-71 was in trouble and needed to be looked over externally, the T-38 was an ideal aircraft to do the job. Every time an SR-71 was flying at Beale, a T-38 had to be airborne or “cocked” on the ground, ready for immediate response with a qualified “pace chase” crew member onboard.

“On one occasion I needed the ‘pace chase’ aircraft to look me over,” explains Col. Richard H. Graham, a former Blackbird pilot, in his book SR-71 The Complete Illustrated History of THE BLACKBIRD The World’s Highest , Fastest Plane. “It was right after takeoff, when my RSO, Don Emmons, and I heard a loud “bang” coming from somewhere in front of the rudder pedals. I was approaching our climb out speed of 400 knots and thought I might have hit a bird. Looking out over the nose, I noticed a large piece of the nose section beneath the aircraft had blown open, still attached, but flapping in the air stream. I couldn’t tell the full extent of the damage because the piece was underneath the nose and all I could see was one end of it flapping about. Joe Kinego, another SR-71 crew member, remembered the ‘funny (then scary)’ radio call Don made back to Beale informing everyone of our problem: ‘The nose is coming off!’ That radio call got everyone’s attention!”

The nose section allowed the SR-71 to have radar-imaging capability with the advanced synthetic aperture radar system (ASARS), photographic imagery with the optical bar camera (OBC), or a ballast installed. The nose section was held on by faun-massive fasteners.

“The T-38 chase aircraft joined up in formation and told us the extent of our damage as we returned to Beale. It was comforting to know everything else was intact. A one-by-two foot metal section of the nose had ripped open while still attached underneath. I always felt fortunate that it happened during daylight. Had it been at night, I’m positive I wouldn’t have been able to see the loose panel and might have discounted the possibility of anything being wrong and continued the mission… you just never know.

“Talking to Lockheed engineers later, they determined there was a good possibility if we had gone supersonic, the entire nose section (which is removable) might have imploded from the supersonic shock wave. That scenario would have probably necessitated an ejection for both of us!”