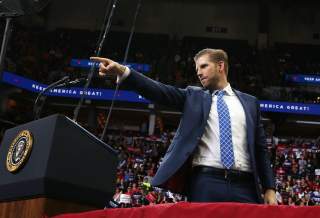 The president’s son Eric Trump told “Fox & Friends” Monday morning that the media coverage of the Ukraine scandal is “a clown show” and added that mainstream outlets are dangerous to America.

Trump went after the media’s coverage regarding allegations that his father used his political position to ask Ukraine’s president to investigate former Vice President Joe Biden and his son Hunter Biden.

“This whole thing’s a clown show,” Trump said Monday. “It’s a clown show. They know they can’t win. … They’re dangerous to this country. The media, they pose a danger to this nation. I mean look at the advocacy there.”

“Fox & Friends” played a clip from Sunday between NBC’s “Meet the Press” moderator Chuck Todd and Wisconsin Republican Sen. Ron Johnson. Todd blew up at Johnson after the senator brought up potential CIA leaks during the Trump-Russia investigation.

The segment also showed a Sunday clip of ABC’s “This Week” with George Stephanopoulos, where Ohio Republican Rep. Jim Jordan steered the conversation away from the president, as Johnson had. Both hosts continued asking questions about President Donald Trump.

“America is so sick of most of mainstream media,” Eric Trump said on “Fox & Friends.”

“Look at the way that they ask questions — senators literally having to shout and scream to be heard over the commentator,” Eric Trump said. “That is not their role. Unfortunately that is the role media plays every single day.”

“That is what America is seeing through. They are part of the left-wing party,” he continued. “They are advocates for the left wing. They won’t even ask the candidates a serious question.”