Is the CMV-22B the Future of Naval Transport or an Expensive Toy? 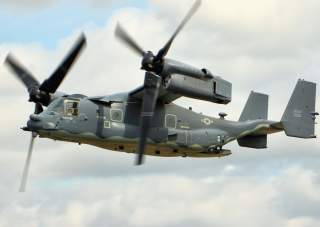 For over fifty years, the Navy has operated C-2A Greyhound cargo haulers with twin turboprop engines to ferry personnel, supplies, mail and spare parts to its massive aircraft carriers at sea—a mission known as Carrier Onboard Delivery (COD). The Greyhound, which is derived from the Navy's E-2 Hawkeye radar planes, can haul up to five tons of cargo or 26 passengers while still managing to land and takeoff from the three-hundred-meter-long carrier flight deck—and then fold its wings to fit in the hangar deck below.

The Osprey has been in development for decades—and the promise of its revolutionary and exceptionally flexible helicopter-to-airplane flight capabilities have been tempered with concerns over deadly accidents and high procurement and maintenance costs. Let’s just say this change is less than universally acclaimed.

Still, the V-22’s strengths are a big deal—the nacelles of its twin Rolls-Royce T406 turboshafts can rotate 90 degrees, switching from vertical helicopter-like flight mode to a horizontal airplane-like configuration. While surface ships love the flexibility of using helicopters to land and takeoff from virtually any cleared deck or surface, helicopters are limited to significantly lower altitudes and speeds, and can't fly nearly as far as airplanes. For example, a typical Blackhawk helicopter has a maximum speed of around 170 to 200 miles per hour and a range of 350 miles—while the Osprey can attain 350 miles per hour in horizontal flight mode (about as fast a World War II Spitfire fighter) and fly up to a thousand miles away.

The downside to the Osprey is that it’s quite expensive to procure and maintain, with unit cost estimates ranging between $70 to $100 million apiece, and flight hour costs of $11,000. This is approaching the price of an F-35 stealth fighter and two or three times the cost of a standard Blackhawk helicopter. The Osprey’s engines reportedly shed excessive heat, potentially damaging deck surfaces, and its powerful rotor wash cause difficulty coping with brownout landings in dusty environments or deploying troops by rope. Furthermore, V-22s have suffered over a dozen deadly accidents over the years related to the complexity of the tilt-rotor system.

In the nine months between December 2016 and September 2017, three Ospreys were destroyed in accidents, causing three deaths. Another Osprey was damaged in a rough landing for an unsuccessful commando raid in Yemen in January 2017 and had to be destroyed with an airstrike. The Osprey’s troubled reputation has even led citizens of the Japanese island of Okinawa, site of a major U.S. military base, to protest having the tilt-rotors based there.

The Navy's CMV-22B principally differs from the Marine Ospreys by having enlarged fuel sponsons, extending their range to 1,320 miles—without even factoring in-flight refueling. Additional minor upgrades include a rapid fuel dump capability, improved cargo bay lighting, and a long-range high-frequency radio. Compared to the Greyhound, the tilt-rotor has a greater maximum cargo load of 5 tons, but a smaller volume of internal space, and can carry three fewer passengers. The C-2A has a faster maximum speed (400 miles per hour), can fly higher, and is way cheaper at $40 million per unit.

But why is the Navy attracted by the Osprey’s vertical-lift off capability? Because it would allow the Osprey to land on ships other than an aircraft carrier! Previously, supplies would have to be ferried by Greyhound to a carrier, then moved by helicopter from the carrier to other surface ships in the carrier task force. The Osprey could simply land directly on many of the other surface ships—and those ships could operate farther afield thanks to the Osprey's far greater range compared to most helicopters.

The Osprey does have few additional advantages over the C-2 for carrier operations. For example, it won't require catapult-assisted takeoff, lowering the number of necessary support personnel, and it has night-vision equipment for night landings. Furthermore, the CMV-22B's in-flight refueling capability could allow even longer-range flights than were possible with the C-2.

One problem, however, is that the Navy's carriers will require the Osprey to heft the F135 turbofan engines used by the F-35C stealth fighters entering service on Carrier Air Wings. The Osprey's cargo bay isn't large enough to accommodate the F135's power module. In 2015, the Marines tested a method of lugging F135s by carrying the larger half of the turbofan on an external sling, though this obviously is less than highly convenient.

Other CMV-22 shortcomings for carrier operations include lack of pressurization, which exposes the crew to inclement weather, and its inability to taxi along the flight deck on its own power while its wings are folded.

Boeing is also looking to convince the Navy that the CMV-22 could fulfill all sorts of secondary roles that S-3 Vikings or helicopters used to fulfill, such as anti-submarine patrols, search-and-rescue of downed airmen, special ops insertion, and electronic warfare. The Marine Corps is also looking into installing heavier armament and defensive systems on its Ospreys, and some of those capabilities could make their way to the Navy.

However, arguably the most intriguing proposal would be to use CMV-22s as recovery tankers. While the Osprey is still too slow to gas up outbound fighters on a mission, a CMV-22 could instead greet the jets when they return, fueling up Hornet and Lighting fighters as they await their turn to land. While the Marines are phasing in such an inflight-refueling system with a hose trailing out the cargo bay door, the Navy has yet to buy into the concept. However, it could relieve the burden placed on Super Hornets assigned to air refueling duties.

In June 2018, the Navy signed a contract for 38 CVM-22Bs to replace its 27 C-2As in June 2018 and reportedly is ready to activate two operational Fleet Logistics squadrons (VRM-30 and VRM-40 based at Norfolk Virginia and North Island, California) and one Fleet Replacement Squadron. While the aircraft are built, personnel will begin training with Marine Osprey pilots in the VMMT-204 training squadron. Production of the CMV-22B has begun in 2018, with entry into operational service forecast in 2020.