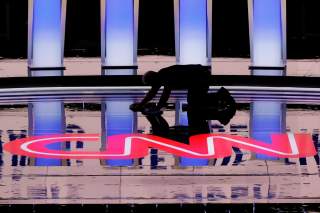 CNN is reportedly refusing to air a Trump campaign advertisement slamming former Vice President Joe Biden and the media for supposedly defending the Democratic presidential front-runner’s past activities in Ukraine.

The channel won’t promote the ad because it mocks CNN personalities Chris Cuomo, Don Lemon, and Jim Acosta, The Daily Beast reported Thursday. The ad also hits House Speaker Nancy Pelosi and other Democratic lawmakers for supposedly protecting the former vice president from criticisms about his work in the Eastern European country.

“CNN is rejecting the ad, as it does not meet our advertising standards,” a network spokesperson told The Daily Beast. “Specifically, in addition to disparaging CNN and its journalists, the ad makes assertions that have been proven demonstrably false by various news outlets, including CNN.”

President Donald Trump has been throttling the former vice president for, among other things, allegedly pressuring Ukraine to fire a top prosecutor who was looking into a company tied to his son, Hunter Biden. Trump’s campaign communication director, Tim Murtaugh, criticized the channel for the move.

“CNN spends all day protecting Joe Biden in their programming, so it’s not surprising that they’re shielding him from truthful advertising too, and then talking to other media outlets about it,” Murtaugh said in a statement.

“This isn’t a cable news channel anymore, it’s a Democrat public relations firm,” he said, noting also that the ad is factually accurate.

“But when President Trump asks Ukraine to investigate corruption, the Democrats want to impeach him,” the ad says. “And their media lapdogs fall in line,” the ad continues with grainy still shots of Lemon, Cuomo, and Acosta, a fierce critic of the president.

Trump, meanwhile, is not giving up the fight. He told reporters Thursday that China should look into the Bidens, adding that it’s “just about as bad as what happened with Ukraine.”

The comments come as Joe Biden’s 2013 trip to China with Hunter Biden comes under intense media scrutiny. Hunter Biden was in the process of forming a Chinese private equity fund during the trip and planned to raise money for the venture. Joe Biden’s son said he met with Chinese banker Jonathan Li and his partner during the trip.