The Coast Guard’s Icebreaker Fleet is Ancient and Shrinking 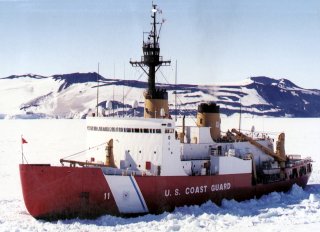 Icebreakers are of high importance to countries with a stake in the Arctic—the United States being one of them. “The United States has vital national interests in the polar regions,” the U.S. Coast Guard explains.

Icebreakers “enable the U.S. to maintain defense readiness in the Arctic and Antarctic regions; enforce treaties and other laws needed to safeguard both industry and the environment; provide ports, waterways and coastal security; and provide logistical support – including vessel escort – to facilitate the movement of goods and personnel necessary to support scientific research, commerce, national security activities, and maritime safety.”

The United States’ current icebreaker fleet is small and old. The only operational heavy icebreaker in American service is the Polar Star, which entered service in 1976. The U.S. also operates a single medium icebreaker, the Healy. In addition, however, there is a second American heavy icebreaker—but it is not in service.

The Polar Sea is the Coast Guard’s second heavy icebreaker, entering service just after the Polar Sea in 1978. In 2010, the Polar Sea suffered an engine breakdown and has since been cannibalized for spare parts to keep its sister ship, the Polar Star, afloat.

Though not heavily armed, icebreakers are not defenseless. For example, the Polar Star carries an assortment of small arms, whereas the new Polar Security Cutter program could see the ships equipped with a larger 25mm chain gun. In the future, however, this could be vastly upgraded.

One former Coast Guard Commandant thinks that there will be sufficient onboard space and electrical output to arm the Polar Security Cutter with various weapons, including cruise missiles.

An interesting and comprehensive overview of the U.S. Cost Guard’s Polar Security Cutter program compiled by the Congressional Research Service can be seen here and is worth reading.

Though an icebreaker almost certainly wouldn’t be as survivable as other U.S. Navy ships, it could potentially host several powerful offensive weapons that would afford the platform a similar amount of firepower, indicating just how important the Arctic region is to the United States.