Coexistence or Confrontation? What Xi’s Third Term Means for Vietnam 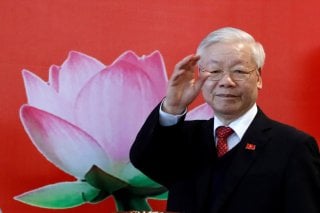 After Xi Jinping was re-elected as the leader of the Chinese Communist Party (CCP) last month, the General Secretary of the Communist Party of Vietnam (CPV), Nguyen Phu Trong, sent a congratulatory message to Xi for starting a third term. Xi’s grip on power has crucial implications for Vietnam’s foreign policy in the coming years. Beijing is expected to be “more ambitious” than ever in pursuit of territorial claims in the South China Sea, which will pose a challenge for Hanoi. Thus, Vietnam may have to face a more aggressive neighbor abroad and a rise in anti-Chinese nationalism at home.

Since Xi ascended into power ten years ago, the international community has witnessed a turn in his South China Sea policy. As Xue Gong, a researcher in Singapore, noted, “China has become more assertive in the South China Sea since Xi became General Secretary of the CCP in 2012.” China initiated massive land reclamation and constructed artificial islands and military facilities in the South China Sea in 2014. This solidified Vietnam’s perception of “a China threat” despite the ideological affinity between the two countries. At the 19th National Congress, Xi stated that “we will improve our systems and institutions and enhance capacity-building for national security, and resolutely safeguard China’s sovereignty and security.” In the 20th National Congress report, Xi further emphasized that “we have resolutely safeguarded China’s sovereignty,” “we will strengthen our capacity to ensure overseas security and protect the lawful rights,” and “we will safeguard maritime rights.” Xi is thus likely to push South China Sea policy harder in his third term.

Ahead of the 20th National Congress, Vietnam seemed to prefer diplomatic resolutions rather than military measures, particularly through party-to-party channels, defense dialogues, and a hotline between leaders. However, as Xi begins his next term, Vietnam should be prepared for a more bellicose South China Sea strategy despite expanding economic ties between the two states. Vietnam has sought to incorporate the South China Sea issue into a greater international laws-based context through its adherence to the United Nations Convention for the Law of the Sea (UNCLOS) and called for support from ASEAN countries. More specifically, Vietnam has forged deeper security ties with the United States to balance China’s aggressive maritime behavior. However, despite Vietnam’s soft-balancing strategies and preference for the peaceful settlement of maritime disputes, Hanoi should not underestimate the risk of armed conflict. As Robert Ross, a professor at Boston College, argued, “the Sino-Vietnamese conflict is more than a dispute over sovereignty and economic rights. It is a struggle between a great power and its smaller neighbor over the great power’s demand for a contiguous sphere of influence.”

From a great power perspective, China does not want Vietnam to be a part of an outside powers’ containment coalition. China thus seeks to stay close to Vietnam by increasing economic ties to keep it under control. This might be a bargaining technique that Vietnam could use to constrain China’s ambitions. However, it does not mean that Vietnam should largely rely on extra-regional powers, particularly the United States, which is seen as the only power that has the capability to deter China at sea. But while outside great powers can help Vietnam and then leave, China will always be Vietnam’s neighbor. As Xi said in 2014 at a meeting with Le Hong Anh, a Standing Secretary of the Secretariat of the CPV Central Committee, “a neighbor cannot be moved away.” Notwithstanding China’s increasing aggression in the South China Sea, Vietnam may still maintain intimacy and socialist comradeship with China while keeping its distance. Following this rationale, Vietnam’s Party Chief Nguyen Phu Trong was the first foreign leader to visit China after the 20th National Congress at Xi’s invitation on October 30, 2022.

Given Xi’s more aggressive approach to the South China Sea, Vietnam may experience an upsurge in anti-Chinese nationalism that has become more prevalent since 2014, when China towed an oil rig into Vietnamese waters. In response, tens of thousands of rioters set fire to Chinese factories throughout the country. Then, in 2018 tens of thousands of protesters opposed pending national legislation to create three special economic zones that foreign enterprises, including Chinese ones, could lease for up to ninety-nine years, posing concerns about an erosion of sovereignty. Nothing will prevent similar events from recurring. According to the 2017 Pew Research Survey, 80 percent of Vietnamese believe that China’s influence is a “top threat.” The consequences of rising anti-Chinese sentiment could be “a double-edged sword.” A recent book, The Double-Edged Sword Effect of Vietnam’s Nationalistic South China Sea Policy, published by Chinese scholar Xiao Luo argues that Vietnam could mobilize the support of anti-Chinese nationalists to consolidate the CPV’s legitimacy in solving maritime disputes. However, rampant nationalism could come at the expense of excluding China.

In Xi’s third term, the Vietnamese administration needs to hold a balanced perspective on its maritime strategy and curb nationalist excesses to avoid damaging the Vietnam-China bilateral relationship.