Cold War Crash: The Tale of a Soviet Su-27 Flanker Colliding with a Norwegian P-3 Orion 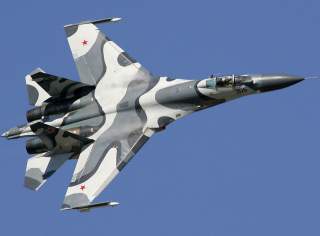 Tsymbal manoeuvred the fighter dangerously close to the Orion and the port fin struck the No. 4 propeller. The dielectric fin cap shattered immediately, but so did the propeller and the debris punctured the fuselage skin, causing decompression; the damaged propeller caused violent vibration, forcing the crew to shut down the engine.

The Sukhoi Design Bureau was tasked in 1969 with developing a fourth-generation heavy fighter and thus began the story of the Su-27, known to the western world as the Flanker – an aircraft which turned out to be one of the most successful Soviet fighter designs.

As told by Yefim Gordon and Dmitriy Komissarov in their book Sukhoi Su-27 & 30/33/34/35, the first ‘official acknowledgement’ of the Flanker’s existence came in the summer of 1985. A documentary about Pavel O. Sukhoi shown on Soviet TV on occasion of the designer’s 90th anniversary included a brief reference to the new fighter and a ten-second sequence showing what was known as the T-10 on take-off. To paraphrase Robert Frost, these were ‘ten seconds that shook the world.’ Yet, it was another two years before the first photos of the production Su-27 appeared in the Soviet press.

In the autumn of 1987 the Flanker became famous when Western aerospace magazines published dramatic close-ups of a 941st IAP Su-27 carrying a full complement of R-27T and R-27ER missiles. These were taken during the widely publicized incident of Sep. 13 1987 involving a Royal Norwegian Air Force Lockheed P-3B Orion maritime patrol aircraft from the 333 Sqn at Bodo Air Base (AB).

The P-3B serialled 602 and named ‘Gunnar lsachsen’ (ex-US Navy BuNo 156602, c/n 185C-5304) was shadowing a group of Soviet Navy ships in the Barents Sea; another account of the story says it was chasing an A-50 AWACS over international waters and trying to prevent it from fulfilling its mission. Lt. (SG) Vasiliy Tsymbal flying Su-27 ’36 Red’ (c/n 36911016816) was ordered to make a practice intercept. Trying to ‘squeeze’ the Flanker out as the fighter moved in close, the Orion’s captain 1st Lt. Jan Salvesen reduced speed by extending the undercarriage and moved to position his aircraft directly above the Su-27. However, he was unaware of the Flanker’s low-speed handling capabilities, and as the Su-27 slowed down as well to keep formation the Norwegian crew briefly lost sight of it.

Tsymbal manoeuvred the fighter dangerously close to the Orion and the port fin struck the No. 4 propeller. The dielectric fin cap shattered immediately, but so did the propeller and the debris punctured the fuselage skin, causing decompression; the damaged propeller caused violent vibration, forcing the crew to shut down the engine. Some accounts say that Tsymbal was not content and positioned his Su-27 ahead of the P-3, dumping fuel on its fuselage! Anyway, both aircraft made for home, landing safely at their respective bases.

A huge investigation was mounted, and reprisal was swift. Three days after the incident Vasiliy Tsymbal was expelled from the Communist Party – a very severe punishment by Soviet standards. One day later, however, he was reinstated. Shortly afterwards he was awarded the Order of the Red Star and transferred to another unit based in Rostov – in other words, kicked upstairs.

The Soviet Union officially apologized for the incident; however, the report of the Soviet accident investigation board stated explicitly that both pilots were at fault – a point debated by the Norwegian MoD. Anyway, Jan Salvesen emerged from the incident with an unblemished service record.

After the incident the Su-27 in question was recoded ’38 Red’ (and later ’31 Blue’), possibly to lead Western investigators astray and generally avoid unwanted interest in this aircraft. Thus, should any party make claims, stating the tactical code ’36 Red’, the Soviet authorities would reply that no such fighter was operated by Soviet Air Force units stationed up north – which would be perfectly true. However, no one ever stated any political claims. The reader may be interested to know that the famous Su-27 did gain special markings – one of the five ‘kill’ stars painted on the port side of the nose was superimposed on the silhouette of a P-3!